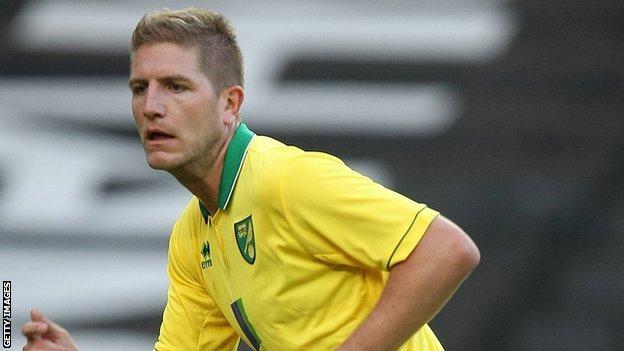 Norwich manager Chris Hughton has given positive news on the fitness of Michael Turner, suggesting the defender will be able to start the season.

Turner had a shoulder operation in the summer and has yet to play a part in the club's pre-season preparations.

But the 29-year-old will feature in Friday's friendly at Braga.

"He's been training with us now for a few days. He will be involved in the game on Friday, which is good news," Hughton told BBC Radio Norfolk.

The Canaries have had injury concerns over both of last season's first-choice central defenders, with Sebastien Bassong recovering from a knee operation.

The Cameroonian is more of a doubt for the first Premier League fixture of the season against Everton on Saturday, 17 August.

"It's been a little bit tough on the centre-halves that are fit because Michael and Seb have both been out," Hughton added.

Midfielder Bradley Johnson has also had his pre-season interrupted with injury, but is expected back in time for Tuesday's visit of Spanish club Real Sociedad.

And any concerns over the future of midfielder Wes Hoolahan have been allayed by assistant manager Colin Calderwood.

The 31-year-old Irishman was absent for Tuesday's friendly at Brighton and instead was used in a young squad against Cambridge United on Wednesday.

"He had something to deal with. We allowed him not to go on Tuesday and hence the reason he was here today," said Calderwood after the 1-0 defeat.

New striker Gary Hooper also featured but saw little of the ball in his first-half appearance.

"We didn't produce anything he would have relished or would have had a chance of getting on the end of," said Calderwood.

"It was a difficult but good game and I think the test was obvious to anyone who saw it."