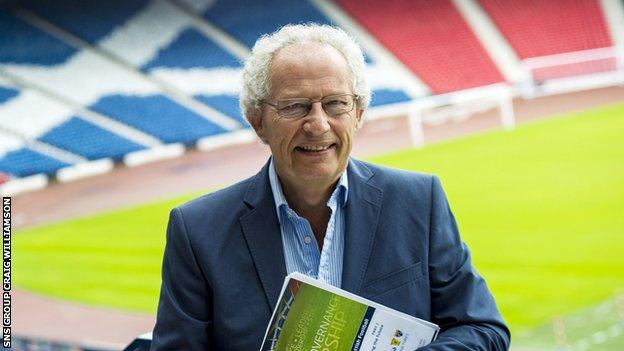 Scottish football is heading in the right direction after "three years of hell" but still has work to do, says former First Minister Henry McLeish.

McLeish was commissioned by the Scottish Football Association in 2009 to provide a blueprint for the future.

He thinks "the mark of respect for a credible game" will come with sponsorship of all its competitions.

But he added: "We've got to change the atmosphere - that's the next big challenge for the game."

Crucially, for me, is the question: would you want to take someone to the game?

McLeish is delighted that more than 95% of the 103 recommendations he made in his review are either completed or under way.

He called for the merging of the Scottish Premier League and Scottish Football League and the introduction of play-offs, both of which have been implemented in time for the new season.

However, the new league set-up and the League Cup are yet to find sponsors.

"A lot of people said three years ago that it was high time that football put its own house in order and you have to help yourself before you can seek help from other people," said McLeish.

"My view is we had to go through three years of torture and hell and kind of torment to get to the point where we can more confidently say, 'look we have done our bit to put our game in order, there are still challenges ahead but we can go to sponsors and investors and say I think we are doing enough'.

"I would be hopeful that with the one league body, with the changes at the SFA, with a purpose behind the game, a lot of sponsors might think 'okay, this is the time to move'.

"It might not be in the next few weeks or months but overall we have to be optimistic."

During a summer of upheaval, the SFA was disappointed clubs voted against implementing stricter regulations to combat racism and sectarianism.

"There is a challenge to the fans and the clubs to clean up the game," added McLeish.

"Crucially, for me, is the question: would you want to take someone to the game?

"In my view there is a big issue about a makeover for the game."

Under current regulations, clubs are able to avoid sanctions by arguing they had taken "reasonably practicable" steps to avoid unacceptable behaviour from fans.

Following the summer vote, the SFA issued a statement saying: "The members did agree in principle to continued engagement on the topic and to devise an action plan to establish a viable deterrent to such behaviour."

McLeish said: "I think Scotland has accepted that we were not in the 21st century and the government has put legislation through, but these are deep-seated cultural issues - there's no point pretending that a bill from the government will solve these problems.

"It's cultural, it's often geographic, it's often local and it's often mixed in with other politics, but again, if the game wants to be credible - and we are talking sponsorship and investment - a lot of people want to see the game changed.

"Anything that might alienate others or detract others from coming, we've got to tackle it."