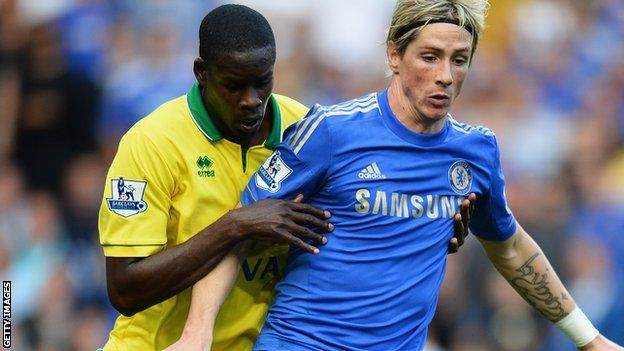 The 27-year-old centre-back becomes Owen Coyle's ninth signing of the summer and has agreed a three-year contract with the FA Cup winners.

He ended the 2012-13 campaign helping Malky Mackay's side to the Championship title.

"To see the desire Leon has to play for Wigan Athletic is tremendous and we're all delighted to have enticed a player of his calibre to our club," manager Coyle told the club website.

"He has shown his qualities in the Premier League on numerous occasions and has the experience of being successful in a division as tough as the Championship."

"That kind of experience for someone who is still only 27 years old is fantastic, and I believe that whilst he has much maturity in his play he also has huge potential to become an even better player here at Wigan Athletic."

Barnett is the second player to join Wigan from Norwich this summer, following the

As Coyle prepares for his first game in charge of Wigan at Barnsley on Saturday, he told BBC North West Tonight that he feels his squad is well equipped for the extra demands of the season ahead.

The Latics are guaranteed to play at least 55 matches because of their Europa League commitments and their appearance in the Community Shield against Premier League champions Manchester United at Wembley on 11 August.

"You build a squad good enough to deal with that, and that's what we've tried to do," said the former Bolton boss. "We still think there's room for more, but they've got to be the right quality."