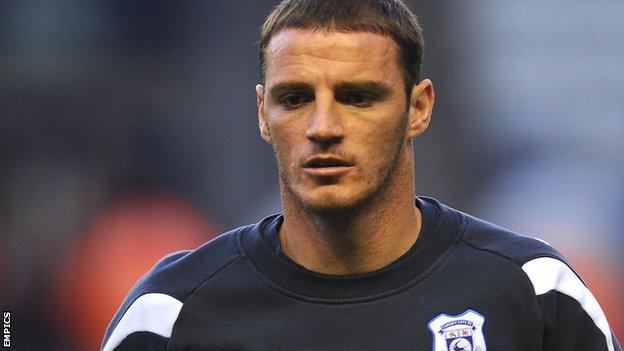 Koumas, who has been without a club since leaving Wigan Athletic in 2011, has spent the last three weeks

He began his career at Prenton Park, scoring 32 goals in 150 games, before joining West Bromwich Albion in 2002.

The 33-year-old will sign for Rovers subject to Football League clearance.

The Baggies paid more than £2m for Koumas, who won 34 caps for Wales before retiring from international football, while Wigan spent £5.3m to take him to the DW Stadium in 2007.

When I finished at Wigan I'd had enough. I was tired of it, I had a few injuries and I just wanted to get away from it and have some time out

His last senior appearance came during a loan spell at Cardiff in May 2011.

"It's great to be back," Koumas told the club website. "One thing I always wanted to do was return here and play, but I didn't want to do it at a stage where I was past it.

"I wanted to come back when I knew I could still do it and hopefully people will see over the coming weeks that it's still there.

"The first 12 months [out of the game] was something I wanted to do. When I finished at Wigan I'd had enough. I was tired of it, I had a few injuries and I just wanted to get away from it and have some time out.

"It was longer than I planned, but over the last 12 months I've been itching to get back. I've been watching football every week and I've missed it.

"I've missed the everyday routine and the banter with the lads. You can't replace it.

"This has been on my mind for a while and Tranmere was, and is, the only place I would have come back to.

"I wouldn't have gone anywhere else. It's not about the money, I'm here for one reason, to play for Tranmere again and to do a job for the club. Hopefully the fans will enjoy what's to come."