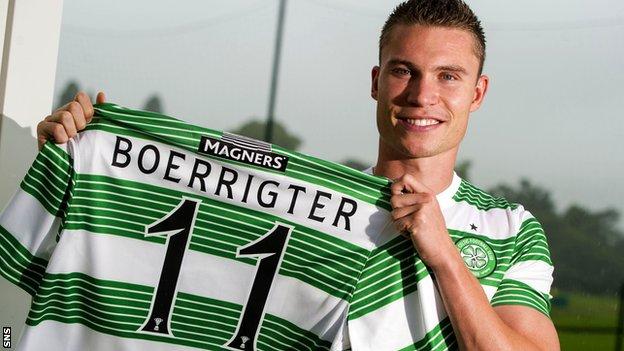 Derk Boerrigter says he moved to Celtic because he is too good to be consigned to the bench with Ajax.

Boerrigter, 26, signed a four-year deal with Celtic but missed out on Wednesday's 1-0 Champions League first leg win against Elfsborg due to injury.

And the winger revealed he is seeking a regular place in Neil Lennon's side.

"I want to play every game. I don't like to sit on the bench. So, for that reason, it was better for me to leave," said Boerrigter.

The former RKC Waalwijk winger says Celtic fans will get a hard-working and confident player when he takes to the field.

"I am a left winger. I am very fast, a good dribbler with a good shot and I can give good crosses," said Boerrigter.

I am too good to sit on the bench, I want to play

"I am here to win championships and perform very well in the Champions League.

"I won three titles in a row in Holland, the first with RKC Waalwijk in the Second Division and then twice in a row with Ajax, so I hope I can make it four in a row."

Boerrigter described his unhappiness at falling out of favour with Ajax after recovering from a back problem.

"I really wanted to leave Ajax and there was a lot of interest from other clubs, but when Celtic came I didn't have to think long," said Boerrigter.

"Celtic is a very big club in Europe. In Holland, we know them well.

"When I went to Ajax, I played very well and even made it to the national team.

"But, because of a back injury, I was out for a couple of months and, when I got fit again, it was hard for me to get back to my old level.

"Eventually, the coach put me on the bench and, at that point, I thought 'I am too good to sit on the bench, I want to play'.

"It is a new opportunity for me to play and to play well and I hope the coach of the international team will visit me and see what I am capable of."

The player is hoping to feature against Elfsborg in the return game in Sweden next Wednesday with Celtic 1-0 up from Wednesday's tie.

However, he will have recovered from an ankle knock to make his debut against Ross County when Celtic begin the defence of their title on Saturday.

"About a week ago, I got a kick on my ankle, but I have almost fully recovered and I trained on the pitch today with the squad and it went well," he explained.