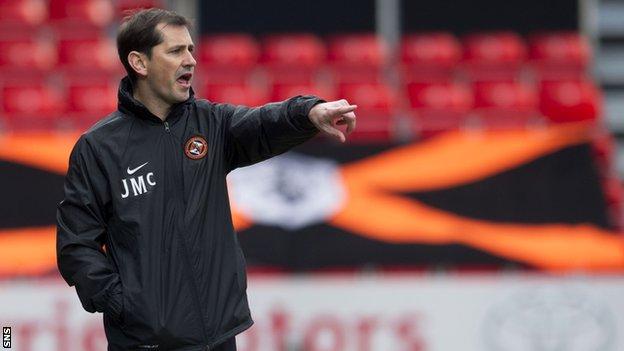 Jackie McNamara has warned his Dundee United squad that a top-six finish in the new Scottish Premiership is the least he expects this season.

United scraped into the top half of the table last term before finishing in sixth place.

McNamara, who took over in January, wants to keep the Tannadice club moving forward as they kick off the new season at Partick Thistle on Friday.

"First and foremost for me, I want to progress from last season," he said.

McNamara believes European qualification should be an aim for United next year but knows home form will need to improve, with only four league wins at Tannadice last term.

It's a funny old computer that does the fixtures

However, he admits his own players may have struggled had they reached one of Europe's premier tournaments this season.

"If we had got into Europe last season, I don't think we would have been ready at the start there," said McNamara.

"It was important that we had pre-season behind us, with myself and new players coming in.

"But, hopefully, next season, it's something we can build to."

The pre-season campaign yielded a morale-boosting win away to Wigan Athletic in a friendly on Saturday as United prepare for the action to begin for real.

"The good thing from the Wigan game was a clean sheet from a defensive point of view against a very good side," explained McNamara.

"The lads go into this game full of confidence, not just because of the results but also the way we played in spells in the last couple of games."

McNamara left Partick Thistle in what proved to be acrimonious circumstances before both clubs finally agreed on a financial settlement in June, but he is not surprised to be facing Alan Archibald's side in the Scottish Professional Football League opener.

"As soon as the promotion was sorted, I think everybody knew that was going to be the case. It's a funny old computer that does the fixtures," he joked.

"We've got to face them at least three times this season, so we will go down there and hopefully get the three points.

"Archie has added a couple of players, but essentially the majority of the players are the ones we worked with last season.

"It should be a good game, with both teams trying to play football. Hopefully, we will be victorious.

"I think it will be quite hostile, just with the way things have happened.

"I wouldn't change anything. I will just go there and be professional and try to get the three points for my new club."