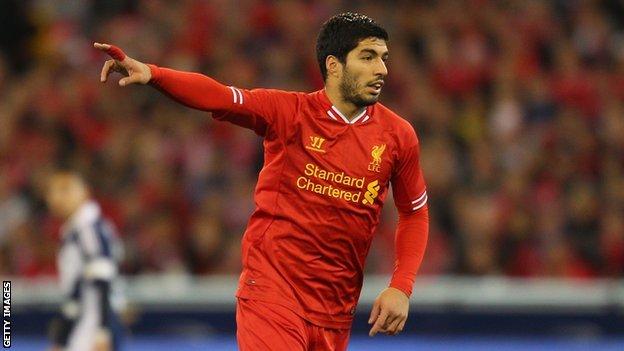 Luis Suarez should stay at Liverpool and turn down the chance to move to Arsenal, according to former Gunners striker Ian Wright.

Liverpool have rejected two offers from Arsenal for the 26-year-old, who wants to play Champions League football.

"I'd welcome him at Arsenal with open arms," Wright told BBC Sport.

"But if I was Suarez, when you look at everything, it does seem strange he would want to go to Arsenal. I would give Liverpool another season."

Wright, who will co-host BBC Radio 5 live's football phone-in show 606 on Sundays with Kelly Cates, added: "Arsenal finally realise they've got to get up there with the big boys otherwise they will be left behind."

Uruguay striker Suarez has spoken of his desire to leave Anfield despite only signing a new long-term contract in August 2012.

He believes of £40m plus £1 triggered a clause in his contract that allows him to speak to suitors, but Liverpool dispute this and have no intention of selling until a £50m-plus valuation is met.

While Liverpool have not played in the Champions League since 2009, Arsenal will feature in the competition for a 17th consecutive season this year.

Reds captain Steven Gerrard ranks the Gunners among his side's rivals for a top-four finish and has questioned the sense in letting them recruit Suarez, who scored 30 goals in 44 games last season.

"Gerrard is not someone who comes out and says things flippantly," said Wright, who scored 185 goals in 288 appearances for Arsenal.

"If you look at Arsenal - not won anything in eight years, just challenging for fourth place, not really any players there who will make him say 'I'm going to play with him and him' - Gerrard has got a point."

Suarez is banned for the first six domestic matches of the new season as he completes a for biting Chelsea's Branislav Ivanovic.

He was also after being found guilty of racially abusing Manchester United defender Patrice Evra.

Liverpool boss Brendan Rodgers has of the debt he feels the player owes the fans after two seasons of controversy - but Wright says this is the only reason Arsenal stand a chance of getting him.

"Suarez is a world-class striker and if he didn't have all the baggage around him, I feel the Barcelonas, Real Madrids and Bayern Munichs would be sniffing around," said the ex-England international.

"That's why I believe Arsenal should try to bring him in - because I feel it's the only time they could get someone like that. In another market, I don't think he'd even look at Arsenal."

Arsenal's only summer signing to date is the free transfer of 20-year-old French forward Yaya Sanogo from Auxerre, and Wright thinks that even if they bring in Suarez, more big names need to follow.

"But they're running out of time and I don't think, at the moment, they've got the ability to attract those players because they haven't won anything in such a long time. This is why Arsenal are in serious trouble right now.

"I would like to see them go as far as they can to get Suarez, but they can't just buy him and not replenish the rest of the team. I think they need a goalkeeper, two centre-halves, two full-backs - for both left-back and right-back positions - another midfielder and two strikers.

"It doesn't make sense buying Suarez for that money and not backing it up with other signings of the same stature."