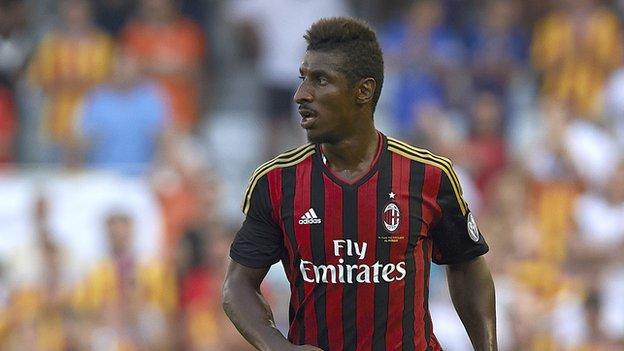 Italian club Sassuolo have been fined for alleged racist comments made by their fans towards AC Milan's Kevin Constant in a friendly in July.

Milan have condemned the abuse but stressed the Guinea international should not have reacted as he did.

Constant had been preparing to take a throw-in during the match at Reggio Emilia's Stadio del Tricolore on 23 July when he reacted to comments from the fans.

Newly-promoted Sassuolo denied any wrongdoing from their fans and Reggio Emilia police stated on Thursday that Constant was not racially abused during the match, but the Lega Serie A reached a separate conclusion.

A statement form Lega Serie A read: "A 30,000 euro fine and a warning for Sassuolo for having supporters direct shouts and chants of racial discrimination at an opposition player in the 32nd minute of the game.

"A 3,000 euro fine for Kevin Constant, who kicked a ball towards a group of opposition fans who insulted him with shouts and chants of racial discrimination, before asking to be substituted and walking off the field of play, disrupting the game for around two minutes."

The incident came seven months after Rossoneri midfielder Kevin-Prince Boateng left the field in almost identical fashion after being the victim of racist abuse during a friendly against fourth-tier side Pro Patria.

On that occasion the Ghana midfielder was followed off by the rest of the Milan side and the match was abandoned. Pro Patria were fined and ordered to play a match behind closed doors while six fans were convicted of inciting racial hatred.

Italian champions Juventus, the third team involved in the pre-season TIM Trophy tournament, were also fined 30,000 euros after supporters were allegedly heard directing racist abuse at Milan midfielder Bakary Traore during a penalty shootout at the end of the opening game.

The Italian Football Federation (FIGC) has also opened an investigation into the events in Reggio Emilia.