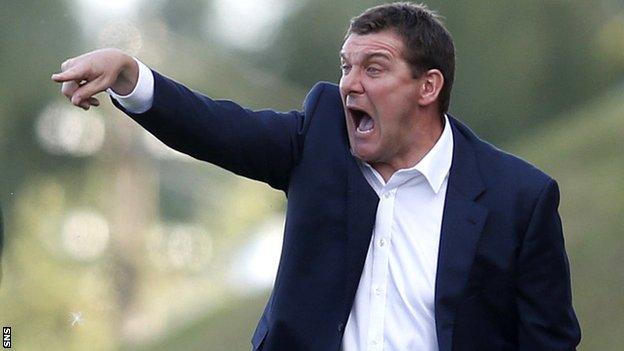 St Johnstone manager Tommy Wright insists his side are not through yet, despite another 1-0 Europa League win.

After recording the same result away to Rosenborg, Saints defeated Minsk in the first leg of their qualifier in Grodno.

However, Wright has one eye on Sunday's league opener at home to Hearts before turning attention to the second leg.

"We'll take nothing for granted," said Wright. "We've got a massive game on Sunday and we've got to recover from that and start all over again."

Stevie MacLean netted the only goal of the match in Belarus to give St Johnstone an away goal cushion ahead of the second leg at McDiarmid Park next Thursday, and while Wright was critical of his team's first half performance, he was delighted with the result.

"You know what you get with Steven," Wright told BBC Radio Scotland. "He probably doesn't get as many goals as he should because of all the work he does outside the box for the team.

"I'm maybe being a bit hard on them tonight, because it was a difficult place to come to, and I don't think we reached the highs in terms of performance that we did against Rosenborg.

"We were workmanlike, it was warm out there and a few of us were heavy in the legs.

"But they only really caused us problems on the counter-attack. They were not breaking us down.

"It wasn't pretty, because they are not a pretty side to play against but we got the result we deserved.

"We knew they were not technically better than Rosenborg but had pace up front.

"However, I will repeat myself - it is only half-time and we will not take anything for granted."

Wright also picked out teenager Liam Caddis - making his first start for Saints since September 2010 - for praise and welcomed back Murray Davidson after the midfielder signed on again with the Perth club last week.

"Liam Caddis for me was another who was excellent," he added. "He's 19 years of age and hasn't started a first-team game for 18 months. He had a very good performance.

"Unfortunately we lost Gary McDonald when his back went into spasm during the game. Murray has come on and does what Murray does. He is a good footballer. I'm just glad that we got him signed last week because he did well when he came on."