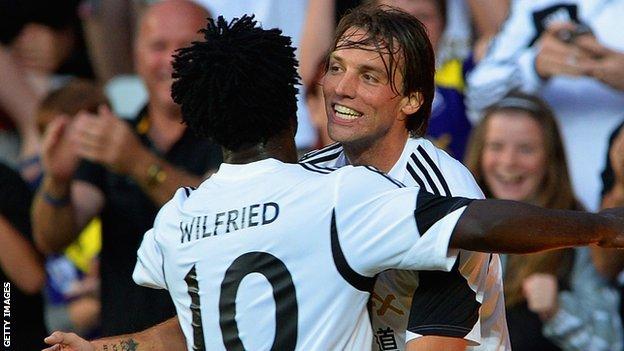 Manager Michael Laudrup was delighted with a "perfect" night as Swansea took charge of their Europa League tie against Malmo with a 4-0 win at home.

to add to strikes by fellow new signing Alejandro Pozuelo and Michu.

"We had five new players, we need some time for everyone to get to know each other," Laudrup said.

It's going well, I am trying try to get to know Michu more and more because it is just my second game

Ivory Coast striker Bony, a £12m summer signing from Dutch side Vitesse Arnhem, headed in Wayne Routledge's neat cross and then scored his second after Michu's shot come back off a post.

Spaniard Michu had opened the scoring with a curled shot and substitute Pozuelo, brought from Real Betis, completed the scoring after a fine team move.

"It's a perfect night. Four goals, not conceding any away goals, two goals from the new man Bony, Michu is back scoring a goal, Pozuelo got a goal in his first game for the club, no injuries - it's perfect," Laudrup added.

Bony was delighted after his two goals at the Liberty Stadium all but killed off the third qualifying round tie.

"I feel good, but the most important thing was to win this game and not concede a goal," Bony said.

"It's very good for us, we can enjoy tonight and think about the next game."

As well as opening his account, Bony was equally excited by his interplay with attacking midfielder Michu, last season's top scorer.

"It's going well, I am trying try to get to know Michu more and more because it is just my second game," Bony added.

"It's important to concentrate in every training [session] and every game."