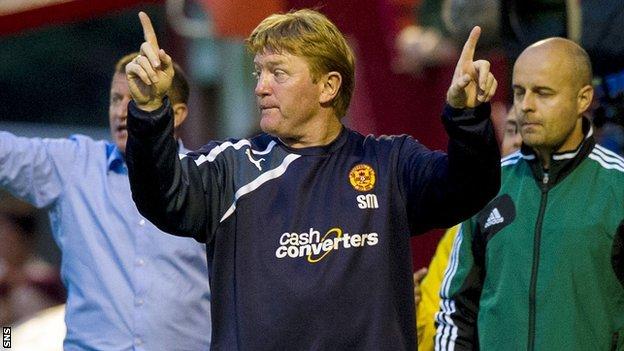 Stuart McCall lamented the loss of a goal on the counter-attack as he accepted Motherwell's Europa League hopes were all but over.

Ivelin Popov added to his opener to give the Russian side a 2-0 advantage ahead of next week's return leg in Krasnodar.

"It was the same old story," said McCall. "We're getting corners and then they break away and, bang - game over.

The Steelmen lost similar goals in last season's European qualifiers and McCall described himself as "frustrated and disappointed" following the defeat by Kuban.

John Sutton almost scored late on for 'Well, his header from Zaine Francis-Angol's cross coming back off the post.

"We worked really hard, we probably can play better but we're up against a really strong side," McCall told BBC Radio Scotland.

"It would've been nice if Sutton's header at the end had gone in.

"As disappointed as we are, there were some bright individual performances.

"Zaine was terrific in the second half. He looked excellent going forward for us.

"[James McFadden] needs another three or four games to be at the top of his game. He won't play against defenders like that every week, that's for sure.

"I don't like doing this but if you compare budgets and you compare players, our lads gave as good as they could.

"They are a strong, strong side. They've not been beaten since November and you could tell why. They're very organised and disciplined and a yard sharper."

Kuban head coach Dorinel Munteanu was pleased that his side had "carried out the game plan and did everything we wanted".

"I congratulated the players after the match but I reminded them that there's a second game and we have to be extremely focused," he added.

Before then, Motherwell begin their Scottish Premiership campaign against Hibernian at Easter Road on Sunday.

"From this minute, we're looking to Hibs," said McCall.

"In the past, we've had a good record and we want to maintain it and get off to a good start."