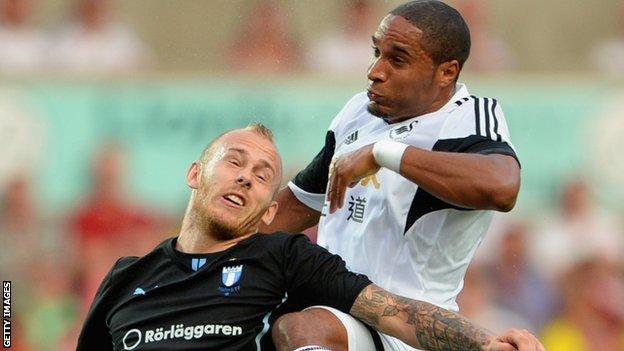 Captain Ashley Williams insists there will be no complacency from Swansea City for the return Europa League leg in Malmo on 8 August.

The Swans travel to Sweden with a 4-0 lead from the first leg after a one-sided contest at the Liberty Stadium.

"They [Malmo] can score goals. We have seen that in the tie before [against Hibernian]," warned Williams.

"So we will go there and be as professional as we can and not take anything for granted."

It's European football. Something that a lot of us never dreamed of. It's here now and we are playing in it and we deserve it

The last time the Swans were involved in a two-leg encounter they beat Chelsea last season to reach the Capital One Cup final, which they won beating Bradford City 5-0 at Wembley.

"We will try and finish off the job. Just like [the] Chelsea semi-final it's only half-time," said Williams.

"It's another game towards the Man U game which is the all-important one."

Two goals from record signing Wilfried Bony and one each from Michu and Alejandro Pozuelo - one of five new signings who made their debuts - helped the Swans take a giant step towards the play-off round ahead of the group stages.

"First and foremost we played well and it was another stepping stone in the way we want to go towards the season [in] the Premier League," added Williams.

"We didn't let ourselves down and the club and probably a lot of people were watching around the world.

"It's European football. Something that a lot of us never dreamed of. It's here now and we are playing in it and we deserve it.

"It's unbelievable. Every season there is something new.

"We keep progressing every year and we feel good about ourselves."

Williams says there is a lot of confidence in the Swans camp after an unbeaten pre-season and Thursday night's comprehensive win over Malmo - their first European adventure for 22 years.

"We have a good pre-season. We look sharp. We look good. We are scoring a lot of goals and we are not conceding, but you are almost a little bit scared to admit to anyone.

"But as long as we work hard and we don't get complacent and just keep trying to good the good things I'm sure we can have another good season."

Listen to the full interview on The Back Page on Saturday morning, BBC Radio Wales and online 08:30 BST.