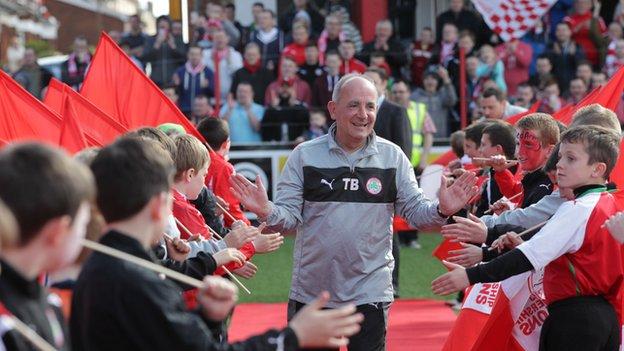 The BBC Sport website assesses the prospects for the new Irish Premiership season, with Cliftonville defending the title they won in style last term and promoted clubs Ards and Warrenpoint Town entering the fray after earning promotion.

The Reds marched to the Premiership title with eight points to spare last season, but now face the difficult task of successfully defending their crown, with Linfield likely to pose the biggest threat to their domination. Manager Tommy Breslin has so far managed to hold on to highly-rated goalkeeper Conor Devlin and strike pair Liam Boyce and Joe Gormley, while winger Chris Curran and Joe McNeill have arrived to add further strength to their squad. The Solitude men will hope to build on the 'feelgood factor' generated by their Champions League tie with Celtic.

The Blues will be under pressure to regain the Gibson Cup which they lost to their cross-Belfast rivals last season. Manager David Jeffrey has been very active in the transfer market in recent months, adding Jonathan Tuffey, Matthew Clarke, Mark Haughey, Sean Ward, James Knowles, Aaron Burns and Andrew Waterworth to his panel. Some impressive performances in the Europa League qualifying rounds indicate that the new additions are settling in well and the Windsor Park outfit will start the new campaign as the bookies' favourites to win the league championship.

The Crues improved their league position to finish second last season without making the same dramatic impact in the knockout cup competitions which they did in 2011-12. It remains to be seen whether they can step to the next level and contend for the Premiership title, but their hugely impressive home form at Seaview should help them challenge again at the top end of the table. Boss Stephen Baxter has acquired the services of Thomas Wray, Sean Cleary and Nathan Hanley.

Glens manager Eddie Patterson will put his faith largely in youth as a number of experienced players have departed the Oval since the financially troubled East Belfast outfit lifted the Irish Cup at the start of May. Colin Nixon, Sean Ward, Stephen Carson and Andrew Waterworth have all moved to pastures new and the club may struggle to repeat their top-six finish of last season. Mark Miskimmin, David Scullion and Jordan Hughes have all signed in the close season, while Matthew Tipton is still understood to be a transfer target.

The Ports will be hoping to make up for a disappointing campaign last time round, when they finished outside the top six and were tagged the major 'under-achievers' of the league. Master marksman Gary Twigg will be a major asset as he begins his first full season at Shamrock Park, having turned out for club since January. Central defender Emmett Friars is Ronnie McFall's most significant summer signing, with goalkeeper Billy Brennan also joining the ranks from relegated Lisburn Distillery.

Manager Oran Kearney's biggest coup of the summer was to retain the services of highly-rated duo Howard Beverland and Stephen Lowry, both transfer targets for Linfield. The Bannsiders hope the arrival of Gary Browne can fill the void left by the departure of star striker Curtis Allen. The return of Stephen Carson gives the Ballycastle Road side a further boost and they will hope to find a greater level of consistency than they achieved in the second half of last season. Goalkeeper Wayne Drummond and defender Stephen Douglas are Kearney's other summer signings.

The surprise packets of last term will hope to avoid 'second season syndrome' as they shed their label of unknown quantities. Whitey Anderson's men made the top six, mainly as a result of their outstanding form in the first half of the campaign and their aim will be to repeat that remarkable feat. The Mallards have managed to hold onto skipper Mark Stafford, but have lost influential midfielder Chris Curran to Cliftonville. Richard Lecky's arrival from Portadown will pose an extra attacking threat.

The Sky Blues ended their long trophy drought by winning the County Antrim Shield in November but maintained their unenviable record of failing to secure a top six place since the league split was introduced. Financial constraints mean that manager Glenn Ferguson must work with much the same squad, with defender Stephen McBride being the only notable arrival. Johnny Taylor returns from injury to bolster the defence, while much will depend on the goal-scoring form of front pair Gary Liggett and Shane Dolan.

The Lurgan Blues are another club to have suffered well-documented financial problems, but manager Gary Hamilton will seek improvement as he begins his second full season in charge. The Glenavon boss has opted to go with experience, adding veterans Gareth McKeown, William Murphy and David Rainey to his squad for the 2013-14 season. Goals were not a problem last season so an improved defensive record will be the priority.

The Swifts have Rodney McAree back at the club in a coaching role and will be keen to avoid being dragged into a relegation battle at the foot of the table. The loss of defender Emmett Friars is a blow, but the addition of former Ards striker Stephen Doyle offers another attacking option. Manager Darren Murphy will operate with a young squad as the club prepare for their 10th consecutive year in the top flight.

Survival will be the name of the game for Niall Currie's side after being promoted to the Premiership as Championship One winners. The North Down side face something of a nomadic existence as Dixon Park, Ballyclare, will play host to their home fixtures in the early part of the season, then Clandeboye Park, Bangor, will become their home for the remainder of the campaign. Kris Pike and Stephen Cockcroft have been released by the club and Darren Nixon has left, while former Donegal Celtic midfielder Ryan Henderson has arrived from Linfield. Ex-Lisburn Distillery pair Scott Davidson and Andy Hunter have also been signed as the club prepares for its first season in the top tier since their relegation in 2006.

Warrenpoint may face a fight to avoid relegation but will take encouragement from the impact made by Ballinamallard as newcomers to the Premiership last season. The South Down side sprang a surprise by defeating Donegal Celtic in the promotion-relegation play-off but, like Ards, will be forced to play their home games away from their own patch, at Stangmore Park. They hope to return to their own Milltown ground before Christmas. Their squad boasts former Newry City players Marty Havern, Darren King, Andy Graham, Timmy Grant and Stephen Hughes.