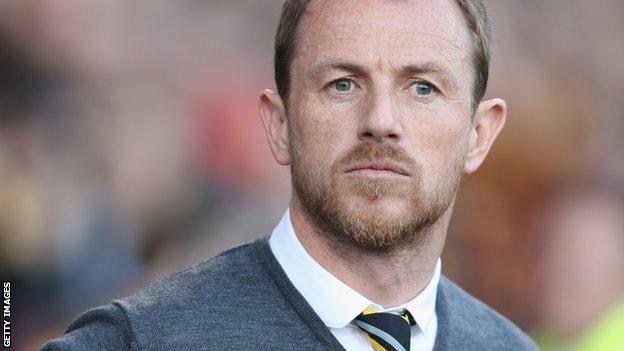 Midfielder Maghoma, who scored 18 goals in 50 games last term, made a summer move to Sheffield Wednesday.

And Zola, who netted 16 times in 38 games as the club reached the League Two play-offs, signed for Aberdeen.

"The big question will be how much do we miss Jacques Maghoma and Calvin Zola," Rowett told BBC Radio Derby.

"That is the key difference - we are not going to get another Jacques Maghoma who is going to win you a game.

"Now I'm not going to say he did it single handed, because that is unfair on the rest of the players, but he came up with a little bit of magic more often than not.

"You can highlight games, such as Fleetwood away, where a little bit of quality just turns the game for you.

"Jacques didn't do it every game and we will try score goals from other areas."

The Brewers, who finished fourth in the league and were beaten 5-4 on aggregate by Bradford City in the League Two play-offs last season, start their campaign at Cheltenham Town on Saturday (15:00 BST).

Among the new arrivals at the Pirelli Stadium this season is former Stoke City and Derby County midfielder Rory Delap.

"Can the players that come in show that ambition with there feet as well as their voices?" Rowett said.

"We are not going to know until we start - we will try to be a better team.

"But that doesn't necessarily mean that we are going to do anything.

"I think what players saw last season is that our methods, to a certain degree, made us competitive and got us to those positions."