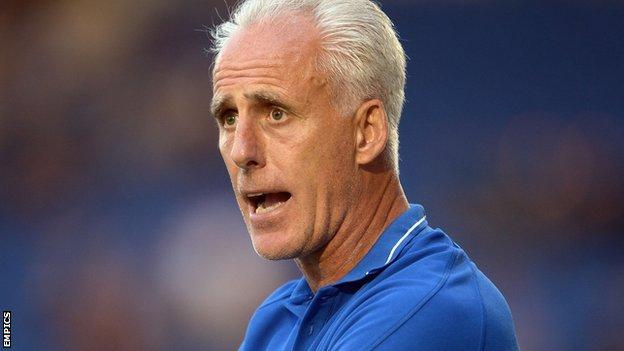 Ipswich Town boss Mick McCarthy has said a top-six finish is a realistic target for his side this season.

The Portman Road club, who have not reached the play-offs since 2005, open their Championship campaign at Reading on Saturday.

"Can we challenge? I'd like to think so. That's what we're aiming for," he told BBC Radio Suffolk.

"Let's start with that. If we're in the top six it will be a good place to be for us."

McCarthy took over at Ipswich in November, with the club bottom of the league, and claimed 53 points from the remaining 33 games to achieve a 14th-place finish last term.

He asked his side to play with a mantra of "don't get beat" - an approach he will continued to adhere to this season.

"I like my team to play football, play forward, play on the front foot and score goals," said the former Wolves boss.

"But I tell you what, I don't like getting done over by three or four goals.

"Why would I change that? Don't get beat and lets try and score more goals.

"That mantra would have seen us in the top six [last season]. There's nothing wrong with that."

McCarthy has brought in eight new signings over the summer and does not expect any more arrivals.

"That's us. We'll have a squad of 22. You could add Jack Doherty [Irish youngster] to that but he's not one for now," he said.