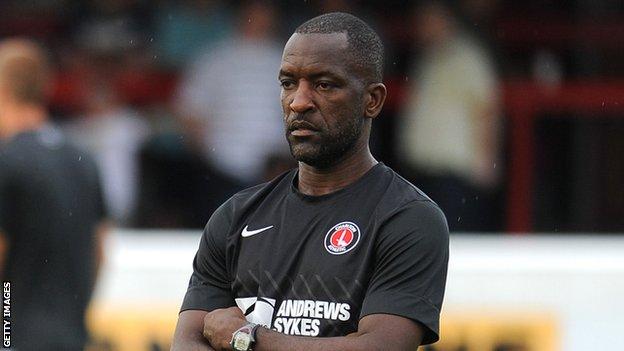 Charlton Athletic manager Chris Powell says it will be difficult for his side to hit the highs of last season.

The Addicks finished ninth, three points off the Championship play-offs.

He told BBC London 94.9: "I am not going to lie - we overachieved last year. Can we match that?

We will have to step up again and it won't be easy. But we are Charlton. We will come out fighting, play our stuff and show people we are no pushovers

"It will be a tall order but we will go for it regardless of who is on the pitch, in the 18 or at the club. Everyone has to be thinking the same and that is part of my mantra."

He added: "It is great when you overachieve because it shows what you can achieve if you set your mind to it, you are focused and your mentality is right. It will be tough for us, no doubt.

"Teams have spent and teams have come down like QPR and Reading. It is not a level playing field as they have parachute payments and players in situ who will be good, good players at this level.

"We will have to step up again and it won't be easy.

"But we are Charlton. We will come out fighting, play our stuff and show people we are no pushovers.

"We have a good nucleus that can definitely handle the challenge."

Powell has added to his squad over the summer with the singings of midfielder Mark Gower, defender Richard Wood and forwards Simon Church and Marvin Sordell.

He is confident his squad are prepared for the rigours of the Championship season.

"They know what is at stake in each and every game and how tough it can be," Powell said. "We know what to expect and we have got to be ready.

"We feel we deserve to be in this league. What we displayed last year over the course of 46 games warrants our position in the Championship.

"Three points off the play-offs with the squad we had was an outstanding return from my players.

"Another home win and a draw would have got us in it, but that is gone now."