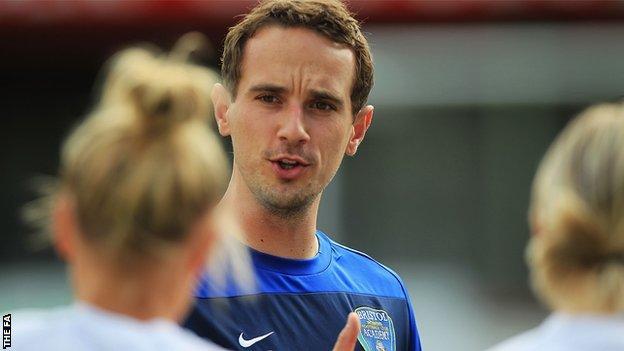 "Overachieving" Bristol Academy are under no pressure to maintain their form in the Women's Super League, says manager Mark Sampson.

The Vixens are level on points with Liverpool at the top of the table, as they return from the mid-season break to face Everton.

"We're under no pressure as we're overachieving," he told BBC West Sport.

"We are in a position we never thought we would be in, so really we've got nothing to lose."

Bristol finished fifth in their first season in the Super League in 2011, and also qualified for the Women's Champions League after reaching the FA Cup final.

They continued their steady growth with a fourth-place finish last season and are now in line to be contenders for the title, which has been won by Arsenal for the past two years.

Seven points separate Bristol and third-place Everton, while Liverpool are at the summit of the league on goal difference.

Sampson added: "We're going to try to play the second half of the season with a real sense of optimism, and think that whatever we get is a bonus.

"It's unbelievable to be top at this point, along with a great football club like Liverpool.

"The competition is so tight. Every game we've played this season we could have lost, but on the flip side of that we could have won every single game in league and cup.

"I hope we can hang on in their in the competition. We've had a great start and if it's the small things that make the difference, then we've got players who can affect that."