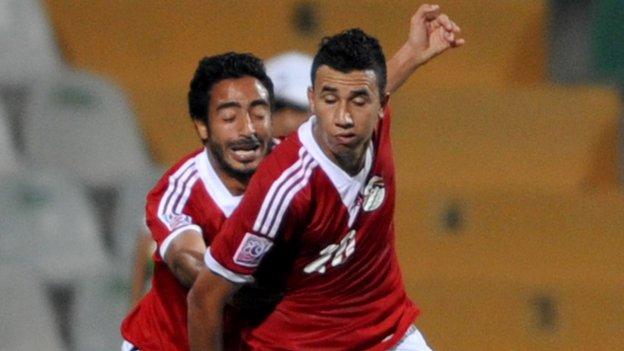 Egypt will play Uganda in a friendly on 14 August with both sides using the game as preparation for World Cup qualifiers.

The match will be played in the coastal town of El Gouna, 430km from Cairo, because of security tensions in the capital.

Since the military toppled former Egyptian President Mohamed Mursi in early July, nearly 300 people have been killed in violence.

Mujib Kasule, the Uganda Football Association's vice-president of the league and a member of the technical committee, told BBC Sport that the game against Egypt is definitely on and only the departure date and other logistical issues need to be finalised.

Uganda coach Milutin 'Micho' Sredojevic also confirmed that the fixture had been given the green light.

"I need to start assembling the team and also get in contacts with some of my professional players ahead of this game," said the Serb.

The Cecafa regional champions Uganda will use the game to prepare for their crucial Group J qualifier against Senegal, while Egypt will use the match as practice ahead of their meeting with Guinea in Group G.

Sredojevic's team revived their hopes of qualifying for the last phase of the 2014 World Cup after two home wins against Liberia (1-0) and Angola (2-1) in June.

The Cranes who are second in their group with eight points need to beat leaders Senegal on 7 September - a game to be played in a neutral ground in Marrakech, Morocco - to book their place in the play-offs.

Egypt are already through to the next round of the 2014 World Cup qualifiers after picking 15 points in Group G, while second placed Guinea have 10 points.

Meanwhile, Malawi have revealed they will play a friendly against Rwanda, also on 14 August.

The Flames are preparing for a decisive qualifier against African champions Nigeria in Calabar on 7 September.

The news has come as a surprise because Football Association of Malawi president Walter Nyamilandu had earlier in the week told local media that Malawi had convinced former African champions Cameroon to host them on the Fifa calendar day.

However, FAM general secretary Suzgo Nyirenda said the friendly against Cameroon did not come off because the Indomitable Lions wanted the match to be played in France, where most of their key players are based.

"The trip to France could have been very costly and government was not ready to release about $53,000 for the trip", he said.