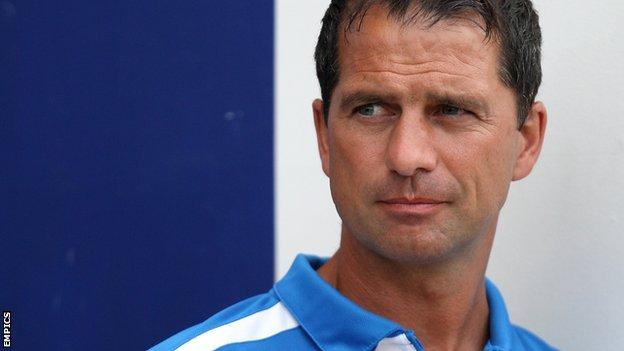 Colchester United boss Joe Dunne has said he is not bothered by his side's status as relegation favourites.

The U's, who avoided relegation from League One by three points last season, are being tipped for another battle against the drop.

"There has to be a bookies' favourite at both ends of the table," Dunne told BBC Essex.

"They'll view where we finished and look at budgets. I'm fine with that. It doesn't bother me what people think."

He added: "I know what I think of us. I know what we can achieve. I believe we can certainly improve the quality of the players we already have here."

Colchester have undergone a series of cost-cutting measures in the past two seasons, with an emphasis on youth production rather than players' wages.

And Dunne has only been able to make four permanent signings this summer, although two of those, Conor Hubble and Mason Spence, have gone straight into the youth setup, with seven going the other way.

But the club is used to defying the odds, most notably in the 2005-06 campaign when the unfancied U's won promotion to the Championship.

"Having an underdog tag is something we've lived with for years. I think we've thrived on it," said Dunne.

"Everything I read about us says 'they did it by the skin of their teeth'. Which is true, but we're still here.

"The key word is resilience. We have that about us. That should give us a slight advantage if we need to go backs to the walls."