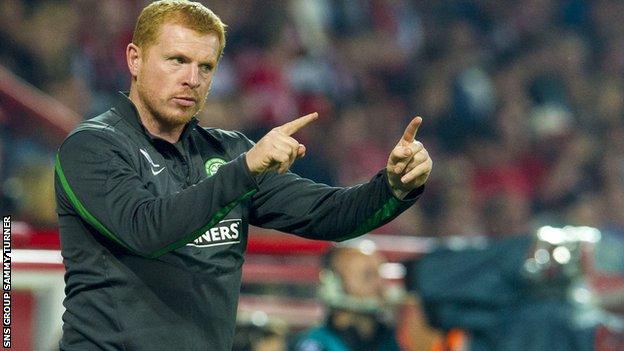 The Glasgow club finished their title campaign 16 points ahead of Motherwell.

But Lennon wants them to exceed their points total of 79 and take them into the high 80s or 90s.

"I would imagine we'd be heavy favourites, but we have to improve on the domestic front from last year," the manager said ahead of their season opener at home to Ross County.

"We lost seven games last season. I want to improve upon that.

"We scored a lot of goals. Our goals for was very good, our goals against was down a little bit on the previous two seasons.

"There is room for improvement. I'd like to improve consistency."

Celtic added the Scottish Cup to their league triumph last term as well as reaching the last 16 of the Champions League.

"The European run was great and it obviously side-tracked the players a little bit," explained Lennon.

"The intensity of the Champions League games and the fall-out afterwards - it was difficult even when I was a player."

Celtic have recouped around £17m in transfers, with striker Gary Hooper and midfielder Victor Wanyama moving to Norwich and Southampton, respectively.

Lennon's men have yet to concede a goal in three Champions League qualifying ties and take a 1-0 lead to Sweden next week, hoping to eliminate Elfsborg and progress to the play-off round.

"I am not getting ahead of myself but obviously what we want is to get back into the group stages of the Champions League," he added.

"We are still a long way away from that and if we can achieve that, it would set the season up brilliantly for us and then we can look at where we went wrong last year.

"Playing at Celtic Park is a great privilege and it's one the new players are looking forward to. They're all itching to play now."

Asked about the prospects of his Scottish Premiership rivals, Lennon said he thought Aberdeen would flourish under manager Derek McInnes.

"Derek will bring freshness to Aberdeen," he said. "At the moment they probably pose the biggest threat to us.

"He has a good record in Scotland, he has recruited well and has got a good blend of youth and experience.

"If and when they get on a roll, they will certainly bring the crowds in. We went up there last year and there was 18,000 there."