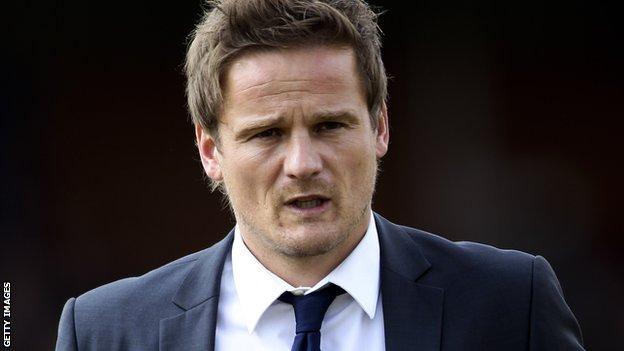 AFC Wimbledon manager Neal Ardley hopes his side will be able to avoid another season of struggle in League Two.

The Dons avoided relegation on the final day of last season.

He told BBC London 94.9: "The aim this season is to tinker with things like different styles and hopefully we have brought in players that can do that.

The test of resolve I will have will be if things aren't going well. If we don't start well then that is when you need to stick by your beliefs

"Progression would be playing a nicer, more attractive style and looking like a League Two club that deserves to be there and is not clinging on."

He added: "I learnt a hell of a lot last season and my staff did. I am sure the players who were here last season will benefit from it."

Ardley was appointed Wimbledon manager in October last year and was immediately thrust into a relegation battle.

However, he has higher hopes for the new campaign.

"Within the camp we have our own targets which we will not tell anyone else and we will work towards," he said.

"The test of resolve I will have will be if things aren't going well.

"If we don't start well then that is the time that people will be questioning your tactics or your style.

"That is when you need to stick by your beliefs. I don't expect it to be plain sailing. Football never is.

"But I look around the dressing room and I see a group of men and potential and I am quite excited by it."

Ardley has been busy reshaping his squad over the summer, brining in 10 new players, including goalkeeper Ross Worner and striker Charlie Sheringham.

He admits his first close season as a football manager has been "a bit of an eye-opener".

"I kind of guessed it would be tough but you literally don't get a day off," he said.

"I have enjoyed the challenge. You get given a budget and then you look at positions at putting certain amounts of the budget into certain positions.

"We tried to stick to a plan but once or twice it has slightly veered off in a different direction.

"When we drew up the list we looked at things we didn't have. We didn't have enough pace last season so we have recruited two or three with pace to get those elements right."