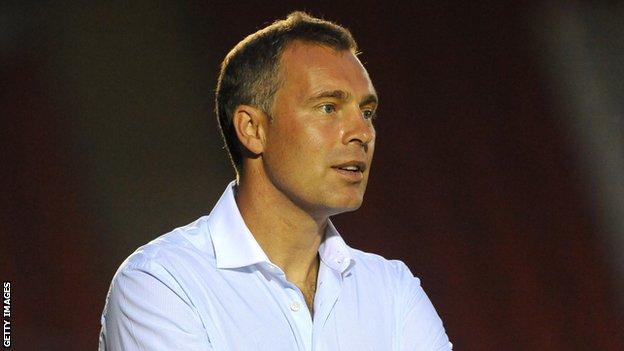 Dagenham & Redbridge manager Wayne Burnett thinks his side are capable of being a surprise package in League Two.

The Daggers avoided the drop into the Conference Premier on the final day of the 2012-13 campaign and are expected to struggle again this term.

But Burnett told BBC London 94.9: "The group of players are hard-working, have a will, a desire and a hunger and we have some quality in the team.

"If you marry all those together you can potentially have success."

He added: "Collectively we have set targets and goals. It would be unfair for me to tell you those.

This is what I have always wanted to do. I have managed in the lower echelons but now I am a Football League manager and hopefully I can make a success of it

"We feel if we get off to a good start and keep everyone fit, we may surprise a few people this season."

Burnett signed a two-year deal at Victoria Road this summer after finishing the season in interim charge following the departure of John Still to Luton in February.

The 41-year-old has implemented a new style of play during pre-season and says his players have been receptive to the changes.

"We have come back, implemented some new ideas and new strategies and we hope they can come to the forefront," Burnett said. "The players have to understand what is required and concentration levels need to be high.

"We have played some decent games, although some of the results have not been ideal, but that is irrelevant as long as the performance is decent. The players have taken to what I asked them to do quicker than I expected. That has been a good aspect.

"This is what I have always wanted to do. I have managed in the lower echelons but now I am a Football League manager and hopefully I can make a success of it."