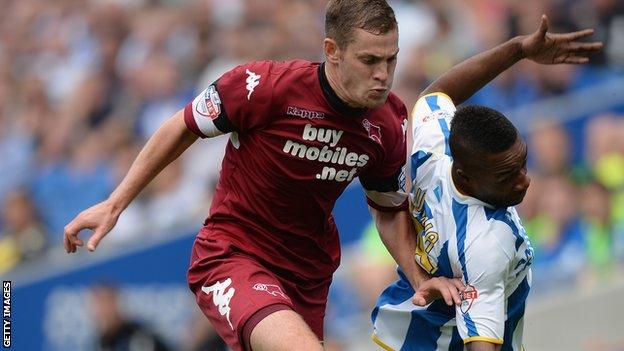 Leonardo Ulloa put Brighton ahead in the first half when he headed home from Inigo Calderon's cross.

Martin equalised for Derby 10 minutes later, and then put his side ahead early in the second half when he converted Kieron Freeman's cross.

Brighton had a penalty claim for handball before the break waved away, and Ulloa hit the post with a header.

Defeat means Brighton are yet to win a competitive match under new manager Oscar Garcia.

Both sides exchanged chances before the hosts took the lead after 17 minutes, Ulloa flashing a diving header past Derby goalkeeper Lee Grant.

But the Rams levelled when Martin, latching onto Craig Forsyth's cross, drove home after seeing an initial shot blocked.

Brighton appealed for a penalty when a free-kick struck Paul Coutts before the break, but referee Andy D'Urso dismissed their claims for handball.

Martin side-footed home to put Derby in front within two minutes of the restart, but Ulloa was close to equalising for Brighton when his powerful header struck an upright.

Brighton's best chance late in the game was denied as Grant tipped over a fierce drive from Kemy Agustien, maintaining the lead that gave Derby all three points.

"We had chances to score but were not clinical, whereas Derby took their chances. We've had the lead in all three of our games so far and have ended up losing.

"If I had a dream this would not be the start I would have wanted. But we have many, many games to play and we will improve.

"After we conceded the second goal we played as I want us to play and we will improve. Obviously we are hoping for a bit of luck as well."

"There was a bit of everything in our performance. The way we started pleased me the most and we controlled the game for long spells.

"We didn't deserve to go behind and once we had taken the lead we had some good situations ourselves.