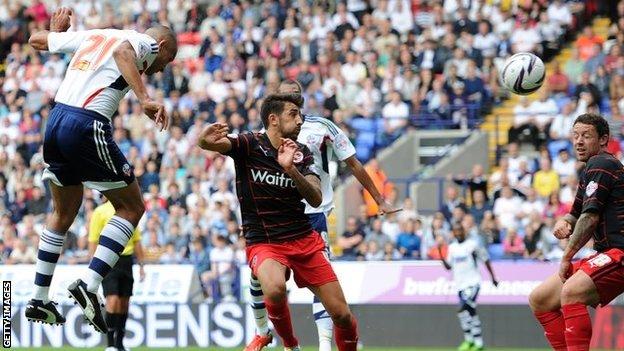 Nick Blackman's first goal for Reading earned the Royals a point at Bolton.

But Reading sealed a draw when Blackman - a January signing from Sheffield United - converted from the penalty spot after a handball by David Wheater.

After two games of the season, Darren Pratley has already matched his tally of two league goals from the whole of last year

Bolton, who started with began well with Jermaine Beckford going close before Pratley headed home at the far post.

Dougie Freedman's side almost added a second when midfielder Medo beat Reading goalkeeper Alex McCarthy from 30 yards with a shot which slammed against the post.

Drenthe and Pearce were then both denied by Bogdan as Bolton made it 12 matches unbeaten at the Reebok Stadium.

"Reading looked like a Premier League side and they counter-attacked us really well.

"I will be amazed if they aren't in the top six. We've played a really top team there and there wasn't much in it.

"They got that penalty and that was the only decision that the referee got right."

"I thought that it was great entertainment for the supporters.

"Royston Drenthe wanted a penalty late on but he should have stayed on his feet. We've had a word with him because we don't want to be doing that at Reading Football Club.

"But Royston was a massive threat and he'll only get fitter and better throughout this season."