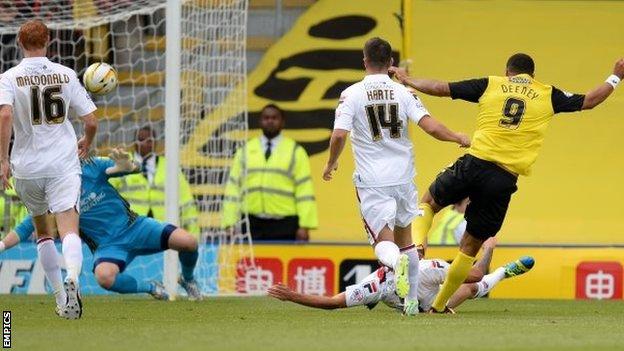 Troy Deeney fired in a hat-trick as Watford thrashed newly promoted Bournemouth to go top of the table.

Gabriele Angella - a summer signing from Udinese - opened the scoring when he scrambled in from close range.

Bournemouth levelled when Ryan Fraser crossed for Lewis Grabban to convert, before Angella headed his second and Deeney scored via a deflection.

Lewis McGugan slotted in and Deeney smashed in from 20 yards before completing his treble with a penalty.

Deeney missed the start of last season but returned to score 20 goals and help Gianfranco Zola's side to the play-off final.

He was decisive again as the Hornets proved too strong for Bournemouth - who were the better side for large periods of the first half.

Sloppy defending allowed Angella to hook Watford ahead but the visitors' spirited response was rewarded when the lively Fraser burst into the penalty area and squared for Grabban to slide home his third of the season.

Watford were much improved after the interval though as Angella again escaped his marker to meet Almen Abdi's free-kick with a powerful header, before Deeney ran on to a neat through-pass to fire across Ryan Allsop and in with the aid of a deflection.

McGugan added the fourth with a neat finish from an angle for his first goal since joining from Nottingham Forest in the summer, before Deeney's spectacular second.

The striker took the ball on his chest and shrugged off two challenges to score from the edge of the area.

Deeney then completed the scoring in stoppage time when he steered home from the spot after Diego Fabbrini was tripped.

"Bournemouth probably didn't deserve to lose 6-1 because especially in the first half they played well and they played in the right way.

"In the second half my team really put a good performance in and it was just what they needed because otherwise it was going to be difficult.

"We changed gears because in the first half we were playing under rhythm and we pushed a little bit higher up the pitch and that made it more difficult for them."

"If we're guilty of anything it was still chasing the game at 3-1.

"We felt we could still try and get back into it but they were ruthless in exposing that and we were a little bit naive towards the end where we kept giving the ball back to Watford and you can't do that against a good team.

"I always knew it was going to be a huge step up for our squad and for everyone at the club.

"If you look at our history we've hardly played in the Championship and history is always a good gauge and this is a big step up."