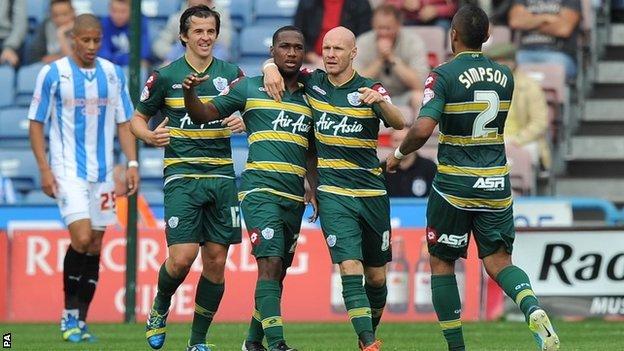 Huddersfield Town produced a dogged display to prevent Queens Park Rangers from maintaining their 100% start to the Championship season.

Former Everton striker James Vaughan put the hosts in front from close range after a neat cross from Oliver Norwood.

But QPR were a constant threat and quickly levelled as Junior Hoilett steered in Yun Suk-Young's cross.

Charlie Austin headed against the bar on his QPR league debut but Town stood firm to claim a deserved point.

QPR boss Harry Redknapp may consider his side unlucky as they showed their quality by controlling much of the first half.

Joey Barton's free-kick was headed over by Clint Hill before Austin pulled the ball back for Andy Johnson, only for Anthony Gerrard to block superbly as the former England striker prepared to shoot.

Danny Simpson then fired wide from distance and Austin, making his first league start after a £4m move from Burnley, mis-hit one shot and found the side netting with a second.

But it was Town who went ahead in the 35th minute, after a move started and finished by Vaughan, who scored twice against Bradford in the League Cup in midweek.

The 25-year-old sent the ball out to Adam Hammill on the right and the former Wolves winger slipped a pass to Norwood, the midfielder clipping over for Vaughan to score from close range.

That lead lasted only three minutes, though, as Rangers hit back through Hoilett. Suk-Young crossed from the left but Norwood failed to clear leaving Hoilett free to fire home at the back post.

After the break, Hoilett forced Town keeper Alex Smithies into a full-length diving save with a 20-yard shot and the visitors almost found a winner when Johnson crossed for Austin, who headed against the bar.

Huddersfield, though, hung in with some resolute defending and a superb Smithies save that denied Shaun Wright-Phillips deep into added time.

"A lot has been said about the spirit - or lack of it - last season. But you do get the sense around the dressing room that there is a better feel this season. The players are a much more resilient bunch who will fight for the cause.

"On the balance of the chances we are disappointed. We conceded a goal when we weren't playing well but got back into it quickly afterwards. We will have to graft and knuckle down and fight this season, just as teams are going to fight against us."

"We were not too spectacular but we are a work in progress. It was a poor goal to give away but apart from that, I can't be too critical of the players. I believe we will get better and, ultimately, it is down to the players to have belief in their own ability to play the ball forward without launching it from back to front.

"It was a deserved point. Our goalkeeper stood firm and we got some good tackles in. We just fell a little short."