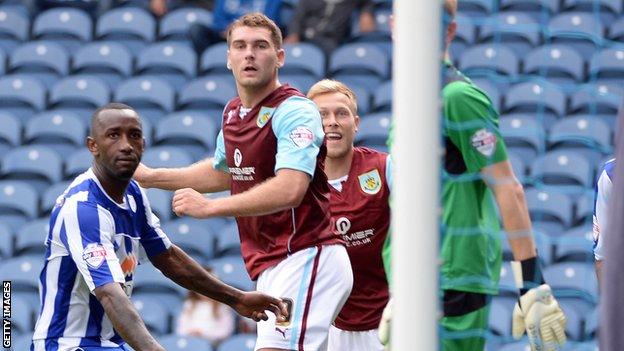 Sheffield Wednesday slipped to a second straight league defeat of the season as Burnley won at Hillsborough to maintain their unbeaten start to the campaign.

Two first-half headers, the first from Danny Ings and a second from Sam Vokes, put Burnley in control at half-time.

But Chris Maguire went close for Wednesday early in the second half before David Prutton headed in to pull a goal back with 20 minutes remaining.

The result leaves Wednesday still without a point this season.

It was the Owls who had actually started the brighter, Michail Antonio pulling the ball back to Jacques Maghoma, who could only fire wide on nine minutes.

But Sean Dyche's side soon started to take control and took the lead in the 33rd minute after Keiran Trippier played Ross Wallace down the right-hand side.

Wallace took his time and lofted the ball onto the head of Ings who nodded it past a helpless Chris Kirkland. And it did not take long for Burnley to double their lead, Trippier beating his defender and whipping a ball to the back-post where it was met by Vokes, who headed it back across goal to make it 2-0 after 38 minutes.

Dave Jones's men again came out the quicker after the restart, with half-time substitute Maguire finding his way past two players before his shot was parried by Tom Heaton in the visitors' goal.

Wednesday eventually found a breakthrough with 20 minutes to go as right-back Liam Palmer put in a cross for Prutton to attack and his diving header flew past Heaton.

The Owls pushed for an equaliser, a half-chance falling to Maguire with 10 minutes to go, but they were almost caught out from a corner when Burnley substitute David Edgar glanced a free header wide.

"We know we can do better and we will work at it.

"I couldn't fault them in the second half, I didn't want them to go into their shells and hide.

"I've said to them from now until the end of your careers you'll make mistakes, it's how you react to that mistake."

"Another performance with good productive moments, but I don't think it's as good as we have played.

"We scored two very good goals I must say, there were very good bits of quality.

"I felt the biggest turning point was an unbelievable not given penalty which, quite frankly, if we score then I think that the game's done and it flattens the crowd.

"Over a season you hope there's a balance of it, but it changed the feeling of the game."