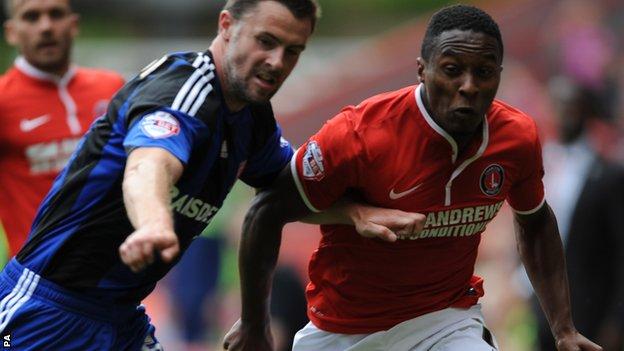 Middlesbrough earned their first points of the Championship season with a narrow win at Charlton.

Danny Green went close for the hosts early in the second half after a first period of few chances.

And George Friend saw a shot flash across the Charlton goal before Jutkiewicz struck the winner.

Defeat leaves Chris Powell's side awaiting their first league win of the season, following an opening-day defeat at Bournemouth.

The visitors made a positive start, despite coming into the game on the back of home defeats by Leicester in the Championship and Accrington Stanley in the Capital One Cup.

New signing Albert Adomah set up Jutkiewicz early on but his shot failed to trouble Hamer, and Adomah sent a free-kick over the crossbar before half-time.

The home side threatened after the break when Green's shot drew a good save from Middlesbrough goalkeeper Jason Steele.

But confusion between Hamer and Yann Kermorgant from a corner allowed Jutkiewicz to loop a header into the net for his first Championship goal of the season.

Steele then denied Green and Stephens headed wide, but Charlton could not find an equaliser and slipped to their second consecutive defeat in the league.

"Sometimes there's games when you just have to accept it's not going to flow the way you want and it wasn't to be today.

"We didn't have that spark that I expected from our first home match of the season.

"The goal summed up our day - Yann Kermorgant is normally great in both boxes but he just didn't get enough on his header and it fell to their striker."

"Managers live and die by their results so it was important for us to get the win.

"We controlled the game for long spells but we've just got to make sure we put the ball in the net more often because it could easily have gone the other way today.

"We've been letting ourselves down in both boxes in our opening two matches and we put in a much better display. Now we have to try to build some momentum from this and move forward."