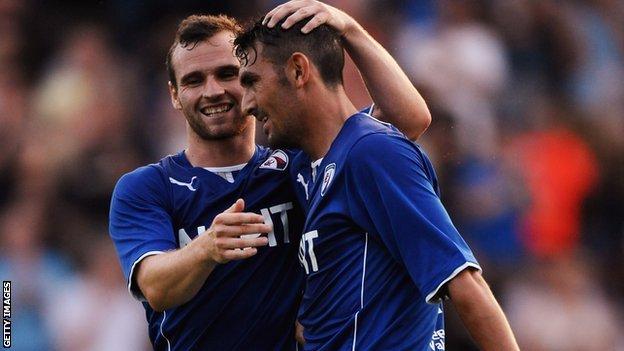 Gary Roberts and Eoin Doyle scored on their home debuts as Chesterfield beat Cheltenham to make it two wins from two league games.

Roberts, who joined the Spireites from Swindon in the summer, powered through on goal and his looping effort took a deflection over goalkeeper Scott Brown.

Troy Brown had the ball in the net for Cheltenham in an entertaining second half but it was ruled offside.

Doyle made sure of the win when his shot went in off Craig Braham-Barrett.

"I felt the second goal would calm us down if we could get it and we had a couple of opportunities, but so did Cheltenham. They don't lie down.

"You'll never beat Cheltenham and it'll be a walk in the park, so to get three points off them is a great result."

"They're a good side and I said that before the game and I'll reiterate it now.

"I thought we were much better in the second half and played with a bit more urgency about ourselves and the game plan was to keep them quiet for 45 minutes.

"To be successful in this league you've got to focus for 90 minutes and particularly away from home. The first goal set us back a little bit more than it should have done."