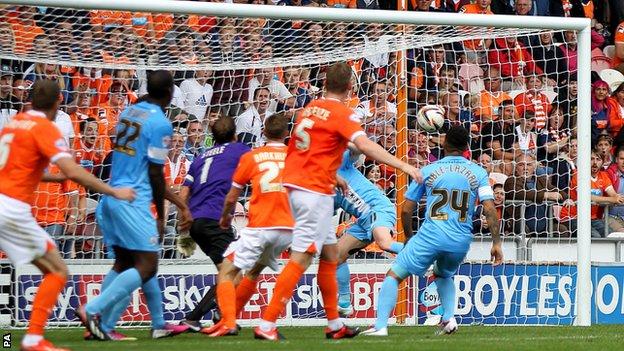 Blackpool continued their winning start to the Championship season thanks to an injury-time own goal from unlucky Barnsley defender Scott Wiseman.

Wiseman could only watch as his failed clearance from a deep Jack Robinson throw-in bounced across the line off the crossbar.

The hosts were indebted to the defensive miscue as they failed to impress for much of the game.

Barnsley even shaded the first half, going close with a David Perkins drive.

Straight out the blocks

The midfielder shot over the bar in just the fourth minute following a sharp one-two with striker Chris O'Grady.

Barnsley - who finished the day bottom of the Championship - remained in the ascendancy for the rest of the opening period, but the best chance fell to Seasiders striker Michael Chopra when he skewed a low effort agonisingly wide of the post shortly before the break.

The visitors again began the brighter following the restart, with O'Grady heading over from close range.

With the game drifting towards a goalless draw, that miss was punished after a Robinson throw-in caused chaos at the back for Barnsley and Wiseman erred.

The result saw Paul Ince's side keep pace with Watford and Nottingham Forest, who are the only other sides to have registered two wins from two Championship games.

"I'd pretty much resigned myself to it being a goalless draw to be honest.

"Though I was disappointed because I felt we created the better chances over the 90 minutes.

"You've got to keep your mind sharp though, and you never know, a chance is always likely to come at the end like that."

"If Chris O'Grady goes and sticks that chance away just after half-time then it could have been such a different game.

"As we worked hard we're all gutted. It was looking like whoever scored the first goal would go on to win, but to lose it like that is sickening really.

"Up until that late stage in the game we had defended so well. We'd had to withstand throw-ins, corners, free-kicks, everything, but we'd defended heroically. It's a difficult one to swallow."