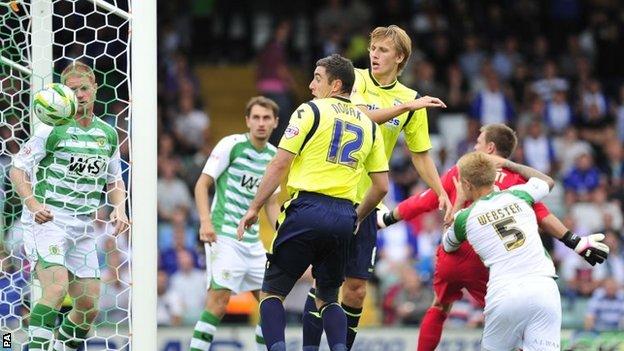 An unfortunate own goal from defender Danny Seaborne handed Birmingham victory at Yeovil.

Gary Johnson's side had the better of the first half, with striker James Hayter hitting the post and Byron Webster testing Darren Randolph.

But Birmingham took the lead when Webster's headed clearance under pressure from Dan Burn looped in off the side of Seaborne's head.

Webster then saw his header hit the crossbar as Lee Clark's side held on.

Opposite number Randolph was then forced into a decent save to keep out a powerful shot from centre-half Webster before Stewart palmed away a drive from Andrew Shinnie.

Hayter then should have put the Glovers ahead but hit the post when clean through on goal.

And that miss proved costly when the Blues went ahead at the start of the second half. Shane Ferguson's corner was met by Webster, but he could only cannon his clearance into Seaborne and in.

"We looked competitive and we could have won that game.

"We did compete and it was fantastic to see the atmosphere, hopefully the fans will keep with us because we more than matched a good Birmingham side."

"Dan Burn has certainly improved, I think he's just getting better and better and I hope he has a similar season for Birmingham as he did for Yeovil last year.

"Then he will go back to Fulham and push for the Premier League squad so at the minute it is benefiting everybody.

"But I thought all the defence were great and when they did break through, our keeper was there."