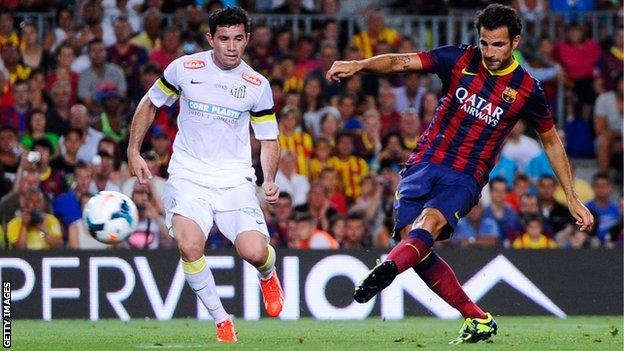 Barcelona manager Gerardo Martino has given Manchester United fresh hope in their pursuit of Cesc Fabregas by admitting part of the decision about a move rests with the midfielder.

The Spanish champions have already rejected bids of £25m and £30m from United for the former Arsenal captain.

The Red Devils are now weighing up a third attempt to secure his signature.

Martino said: "I would prefer him to stay with us and I dare say he will, but it's his decision."

He is one of the best players in the squad. I think he will stay. But there's a part that he has to decide

Barca's hierarchy have always been adamant that Fabregas will not be allowed to leave, but Martino's latest comments carried a significantly softer tone.

Speaking after his team's 8-0 friendly thrashing of Brazilian side Santos at the Nou Camp on Friday, the recently appointed Martino said: "I had a short chat with him and told him what I think.

"Cesc will decide the situation, but it has not occurred to me that I won't be able to count on him.

"He is one of the best players in the squad. I think he will stay. But there's a part that he has to decide."

Although he started more games in La Liga than any other outfield player for his club last season, Fabregas is believed to be disenchanted with the number of times he was substituted and his difficulties in commanding a place in the team for Barca's most important games.

Martino reiterated he wants the midfielder to stay, adding: "If it was my decision, there wouldn't be any chance of Cesc leaving."

Fabregas, 26, was on the bench for Friday's meeting with Santos but came on at the start of the second half - alongside new signing Neymar - and made his mark by scoring twice and setting up the final goal for teenage striker Jean Marie Dongou.

Lionel Messi, Pedro, Alexis Sanchez, Adriano and an own goal by Santos defender Leo accounted for Barca's other goals.