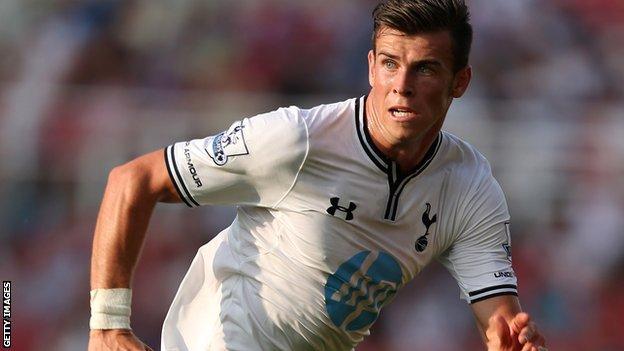 Gareth Bale has not travelled with Tottenham for their pre-season friendly against Monaco on Saturday.

The 24-year-old forward is believed to be nursing a minor injury but his absence will only heighten speculation about a potential move to Real Madrid.

Bale has indicated to Spurs he wants to speak to the Spanish club about a transfer to the Bernabeu.

And former Real manager Jose Mourinho has said he tried to sign the Wales international for the club last season.

Mourinho, who left in June to rejoin Chelsea, told ESPN on Saturday: "I asked the club to buy him last season but it was not possible.

"It looks like it is happening this season so I am happy for them because they get a fantastic player but, of course, the numbers are huge numbers and the kid has to go now and there's pressure to prove that he's worth that investment."

Mourinho's successor, Carlo Ancelotti, says Real and Spurs are in negotiations over a deal for Bale.

"I believe the club is in talks to find a solution and we will see what happens," he said on Thursday.

There are reports Real are willing to pay in excess of the world record £80m they spent signing Cristiano Ronaldo from Manchester United in June 2009.

Bale played the first half of Tottenham's pre-season friendly against Swindon on 16 July but has since been absent as the White Hart Lane club continue their build-up to the Premier League campaign.

He missed the game against Colchester on 19 July and did not figure in the Asia Trophy matches against Sunderland and South China on 24 and 27 July respectively.

If he does move to Madrid, the deal would represent a huge profit for Spurs on a player who cost them £10m when he joined from Southampton in May 2007.