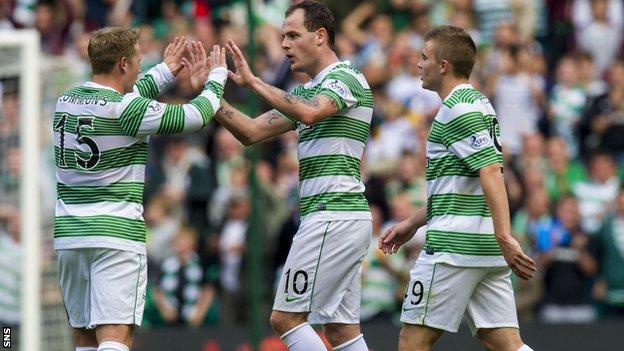 Stokes' brace helped the champions come from behind to win 2-1 in their Scottish Premiership opener.

"Anthony's part of it and there's never any question of him being left out of things," Lennon told BBC Scotland.

"His goal record here is very good and he brings a lot more to the team than just goals."

In a game where Celtic created countless chances, Lennon admitted the now departed Gary Hooper may have had a field day.

"There's no question that Hooper might've had a few himself today but I was really pleased with Anthony," Lennon said.

"His link-up play got better as the game went on and he scored us a great goal to win the game."

It was a win the hosts did not not look like getting with just three minutes on the clock.

Darren Maatsen, one of Ross County's four Dutch summer signings, blasted a terrific diagonal 20-yarder in off the crossbar to silence Celtic Park.

However, it became apparent Lennon's side had the confidence to respond, with their own debutant Dutchman Derk Boerrigter instigating a number of attacks and going close to scoring himself before being withdrawn with an ankle knock after half-an-hour.

"I hope everyone saw what Boerrigter can bring to the team," stressed Lennon.

"He gave us that real impact on the left-hand-side and even when we were attacking down the right he was getting in there and creating chances.

"He was part of the whole response and nearly scored.

"We were a bit dozy to start with and we got punished for that with a fantastic goal from Ross County.

"But our response for the next 84 minutes was scintillating football. I couldn't have asked for any more and if it had ended up 1-1 I would've still been very pleased."

Celtic's equaliser came on 27 minutes when a blocked Joe Ledley shot was turned onto the post by Boerrigter and Stokes was on hand to tap in from one yard despite cries of offside from the visitors.

But Lennon, who positively acknowledged the "zest and spark" his team showed, had to wait until the closing stages for Stokes' near-post winner.