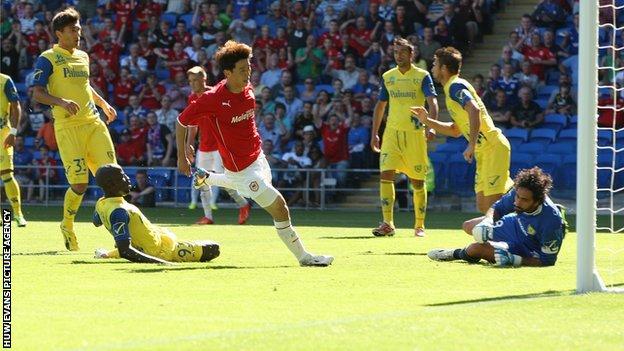 The midfielder turned in a rebound after Chievo goalkeeper Lorenzo Squizzi had beaten away Craig Noone's shot.

Peter Whittingham went close for the Bluebirds with a couple of free-kicks, but their Italian visitors were unlucky not to score.

Sergio Pellissier had a shot cleared off the line and Alberto Paloschi hit the post for The Flying Donkeys.

Cardiff's new central defender Steven Caulker started on the bench as they continued their Premier League preparations against their Serie A visitors.

who joined for a fee in excess of £8m, came on as a second-half substitute in place of captain Mark Hudson to make his Cardiff debut.

Another defensive signing, made his first start in Bluebirds colours and played the full 90 minutes.