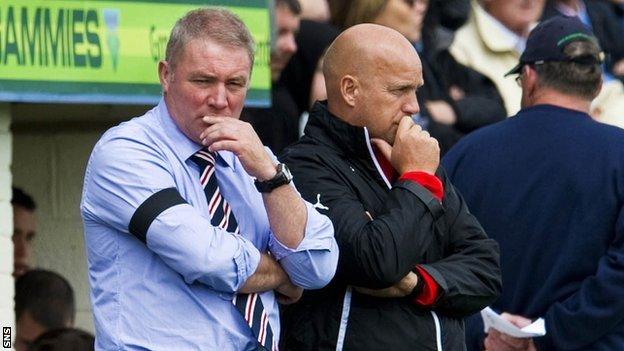 Green, who has returned to the club as a consultant, had been quoted as saying that McCoist's side had to win a cup as well as League One this season.

But, after the League Cup loss, McCoist said he was "appalled" by the words of a man he considered "an embarrassment".

"The self-acclaimed straight-talking Yorkshireman has again let himself down.

"His contempt and total lack of respect for my players, for our football club, for our support and Scottish football in general is appalling.

"If it was a threat then the self-acclaimed straight-talking Yorkshireman should know that boys from the West of Scotland don't scare easily."

Green quit as chief executive in April before being cleared by an internal investigation over claims of close links with former owner Craig Whyte during last year's takeover of the club.

However, Rangers said in a Friday statement to the London Stock Exchange that .

Hours later, there was evidence of fresh boardroom turmoil, with revealing that a group of Ibrox shareholders are aiming to remove key board members, including new .

After the defeat at Station Park, McCoist, who was unhappy with Green branding his players "the worst Rangers team ever" last season, made it clear he did not welcome the Yorkshireman's return.

"After I've given him that endorsement, it would be crazy of me to say 'welcome back Charles'," he said.

"I've got to be careful because Forfar deserved their win and well done to Dick Campbell and his players.

"But our players picked up the newspaper at breakfast to be reminded they're the worst team in Rangers' history.

"Instead of concentrating on the match, their minds are elsewhere and they're worrying about their jobs. Because, let's face it, if he's said we don't win a cup and we go then some of the players would be under threat too."

Rangers had been unable to field eight summer signings against Forfar's part-timers because a signing embargo imposed a year ago does not end until 1 September.