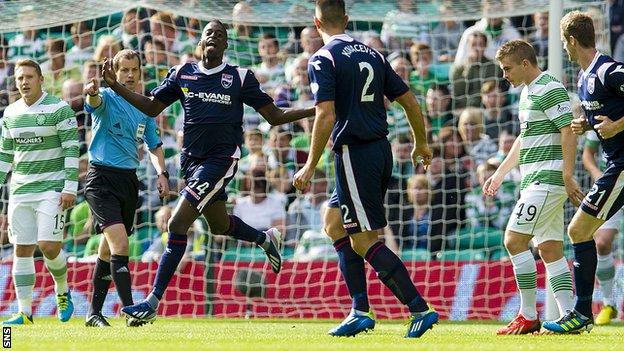 "We're Ross County, a small team from the north of Scotland trying to come and compete with a multi-million pound team."

Maatsen, one of five County debutants, thumped his goal in off the crossbar after just three minutes - a goal his team-mates will struggle to beat for quality throughout the rest of the season.

However, Celtic quickly recovered and began to engineer attack after attack, leading to an equaliser from Stokes on the half-hour.

Despite admirable resistance from the Dingwall side, the Irishman scored his second minutes from the final whistle.

"It was a fantastic goal from Maatsen and I thought [Kevin] Luckassen did exceptionally well up front too," Adams said.

"I thought Celtic played well - a lot better than they did against Elfsborg on Wednesday.

"The players stuck to their task very well - we've worked on different systems throughout the pre-season. We knew we'd have to defend well and it was a hard task.

"From my point of view our season starts next week."