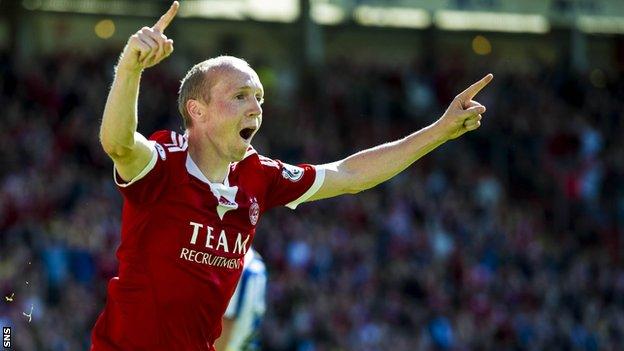 Aberdeen manager Derek McInnes hailed the impact of his three debutants in the 2-1 home win over Kilmarnock.

"Three points is no more than we deserve, we were by far the better team," McInnes told BBC Scotland.

"We knew the crowd would be here in good numbers and we wanted to deliver the three points. We got the job done and we did it with a bit of style."

Niall McGinn's cross was met perfectly by the head of Flood in the second half to double the lead, before Killie's Kris Boyd pulled one back and made the final stages a bit nervy for the home support.

"We took a chance on Calvin," McInnes said. "We anticipated Kilmarnock struggling with a bit of presence at centre-back and that was the case.

"Once he got his timing right he was a real handful and he does brilliantly for Jonny Hayes' goal.

"Robson had real times of class and brought composure to proceedings. We need to make more of his set-play delivery because it was on the button every time.

"[The performance of] Willo Flood was exactly why I brought him here. He'll be the catalyst for anything we do.

"He's energetic, passionate and dictates the tempo of the game, with and without the ball."

A crowd of 13,149 took in proceedings at Pittodrie, which is significantly higher than last season's average attendance of 9,611.

"The support showed the same energy and passion, they enjoyed watching their team on the front foot," added McInnes.

"The boys are relishing playing on the surface and we looked a real attacking threat.

"We want to score more goals here and we came very close to doing that."