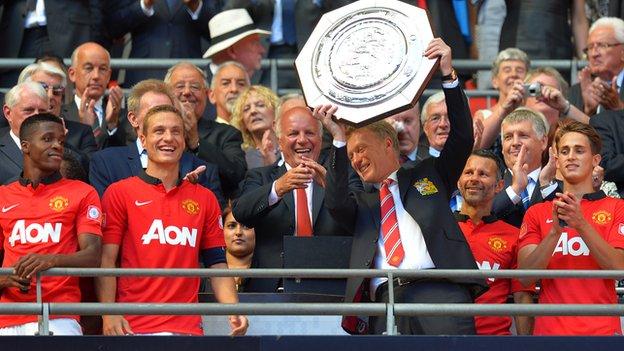 Robin van Persie ensured the David Moyes era at Manchester United began with a trophy as Wigan were beaten in the FA Community Shield at Wembley.

New United boss Moyes has spent most of his summer discussing the future of Wayne Rooney, but back on the pitch it was last year's top scorer Van Persie who again proved the difference.

The Dutchman took just six minutes to open his account for the new season, steering a powerful header into the corner from Patrice Evra's clipped cross.

"It was an excellent performance from Manchester United. They dominated Wigan, who did not put David De Gea in the Manchester United goal under any pressure. There were many positives for David Moyes. The win has relieved a little bit of pressure on him."

And while Championship side Wigan impressed for periods, Van Persie settled the contest after the break when he fired in via a deflection.

In truth, a victory against last season's surprise FA Cup winners was the minimum required from Moyes's meaningful debut in the United dugout as he began the ominous task of replacing Sir Alex Ferguson.

And while his side looked sharp in spells - with veteran Ryan Giggs particularly impressive in the opening stages - Moyes may have been concerned by the ease with which Wigan controlled the ball either side of half-time.

Owen Coyle's team were comfortable during that period and, had summer signings Grant Holt and James McClean linked up with more accuracy, could have caused United more problems.

Once Van Persie found a second goal for United, though, the game was won, leaving Moyes to contemplate his first managerial honour since guiding Preston North End to the Division Two title in 2000.

The discussion will now inevitably return to the status of Rooney, who was deemed unfit to feature with a shoulder injury sustained in his sole pre-season run-out for United, but fit enough to play at least some part for England back in this stadium on Wednesday against Scotland.

United started like champions, with the first goal of the Moyes era coming from a predictable source.

Van Persie started the move by spinning a pass out to Evra on the left wing before making his way into the area. Evra looked up and picked out the Dutchman, who evaded his markers to power in a wonderful header from 15 yards.

It was a fabulous finish and threatened to all but end the contest before it had really begun.

For the following quarter of an hour Wigan - with Holt left increasingly isolated up front - were left chasing shadows as the impressive Wilfried Zaha, Giggs and Danny Welbeck interchanged at will behind Van Persie.

But the storm was weathered by the Latics, who ended the half on top with McClean twice putting in testing balls across the face of goal which Holt could not reach.

When David De Gea flapped at a set-piece to allow Emmerson Boyce and then Leon Barnett a chance to head at goal, Wigan will have felt hopeful of getting back into the game.

And it was the Championship side who continued to set the agenda after the break until Van Persie struck again in the 59th minute.

Again Evra started the move, linking with Tom Cleverley on the left before finding Welbeck on the edge of the area. The England man could have shot but played it to Van Persie, who, despite having four defenders in close attendance, was able to turn on to his left foot and fire in a low shot which took a deflection off the heel of James Perch and wrong-footed Scott Carson.

That signalled a comfortable end to proceedings, with both sides making changes and former Latics midfielder Antonio Valencia going closest to a third goal when he shot wide.

United will face a sterner test at Swansea on Saturday, while for Wigan it is back to life in the second tier at Bournemouth.

"We always knew that it would be a tough afternoon, we conceded an unbelievable finish. The header could only go in one place. But we had a good spell either side of it and United got a fortuitous second goal which finished the game.

"We are trying to get back to playing these elite teams every week. We are building a good side here, I am still looking to add to that, though my chief executive may not want to hear that!

"There is a lot we can take from today's game. James McClean wants to focus on his football and he was pleasing on the eye. He caused them problems and could have scored."

"I class that as another piece of silverware for Sir Alex. It was his team that won the league by 13-15 points so it's his team. The ones going forward will be down to me.

"Wilfried Zaha has done well in pre-season and it was right for him to feature today. He picked up an injury. We are looking forward to using him as the season goes on."