A Callum Paterson header gave Hearts a vital victory and bragging rights in a frantic and edgy Edinburgh derby.

Hibernian looked the more threatening with James Collins and Tom Taiwo having the best chances after a poor first 45.

But it was Paterson's header after a wonderful cross from Dylan McGowan which gave the hosts the three points.

The result helps Hearts nibble into their 15-point administration penalty while Hibs have yet to record a point or score a goal this season.

It was a match from the visitors' perspective which could have done with the imagination and unpredictability of Leigh Griffiths, the saviour of Pat Fenlon's men so many times last season. 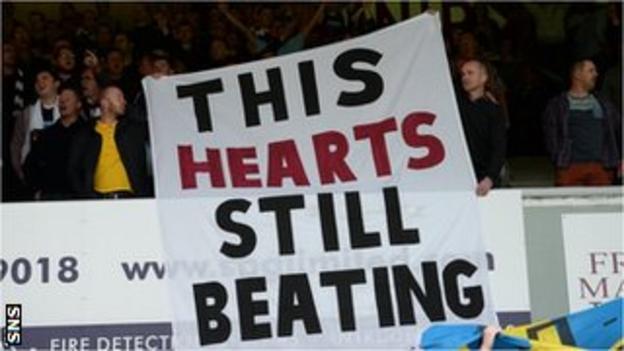 New striker James Collins was hoping to erase the Scot from the supporters' memory, though, Griffiths would have been at the forefront of green-and-white thinking when Collins had a couple of good second-half chances to give his side the lead, but more so when Taiwo spurned a great opportunity before the Hearts opener.

A nervy encounter began with both teams struggling to settle into the game, drained of confidence from their own well-documented problems.

Hearts with administration etched into the back of their mind; Hibs still feeling the numbness from their European humiliation against Malmo.

The hosts had Ryan Stevenson taken off early on following a challenge from Hibs' Rowan Vine, who was in place instead of the injured Alex Harris.

It typified an ill-tempered and bruising half with Vine in amongst the thick of the action, letting his presence be known to Jamie Hamill.

Chances were at a premium in the first 45 and referee Thomson was arguably the busiest man on the pitch as the game threatened to spill over on numerous occasions, with the official having to book five players before the break.

But the second half at least offered more sightings of the target for both teams as they produced a flurry of chances.

Hibs attacker Collins showed good strength to hold off the hosts defence but he screwed his shot wide and another half-chance fell to him around the hour mark but it was straight at Hearts keeper Jamie MacDonald.

At the other end Hamill tried his luck from distance, sending a powerful, swerving effort towards the target - saved by Ben Williams, before Craig tried an audacious half volley for the visitors.

Vine and Craig linked up to great effect and it was the pair's combination that led to Hibs' best chance of the match which fell to Taiwo, but he couldn't connect properly with the effort.

And just as though it looked like Hibs were starting to assert their authority on the game, Hearts opened the scoring with a fantastic piece of play from McGowan.

The 22-year-old whipped in a delightful cross for Paterson to head home at the front post to send the Jambos fans into raptures.

Hibs tried desperately to find an elusive equaliser with Paul Hanlon and Vine coming close, but Gary Locke's men held on for a crucial victory which ended Hibs' five-game unbeaten run against their city rivals.