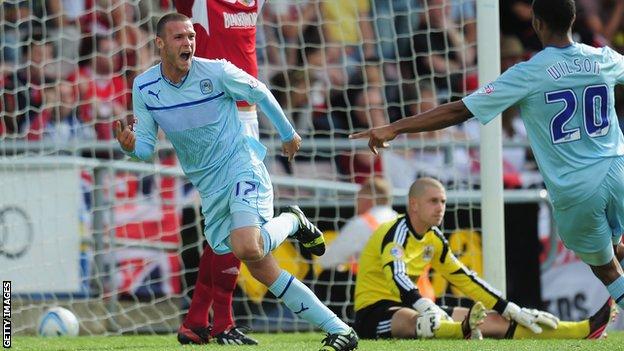 Coventry scored a late winner to edge a nine-goal thriller with Bristol City in their first "home" game at Northampton's Sixfields.

The Sky Blues were 3-0 up at the break through Leon Clarke's penalty, Callum Wilson and Billy Daniels.

But the Robins were level by the 74th minute, thanks to two Sam Baldock goals and a Jay Emmanuel-Thomas free-kick.

Wilson restored the lead immediately, and after Marvin Elliott equalised, Daniels stole the points for Coventry.

Sunday's game marked the start of the Sky Blues' three-year exile to Northampton, 34 miles away from their Ricoh Arena home, and was watched by just 2,204 people - in contrast to their first game in Coventry last August, when over 12,000 fans saw them draw with Sheffield United.

Those who chose not to stay away were greeted by a urging them to boycott the game. Those fans proceeded to watch the game for free from the top of an adjacent hill.

The game was played on Sunday as Northampton were playing at Sixfields, their regular home, on Saturday with the Cobblers having preference when the two teams' home games were scheduled for the same day - the first of 15 such clashes in the league this season.

The Sky Blues started the season with a 10-point deduction as Coventry City FC Ltd, which entered administration in March, faces liquidation following a row over rent with Arena Coventry Limited, which runs the Ricoh Arena.

More than 5,000 fans turned up at the Ricoh Arena for a match between Coventry City Legends and Midlands All Stars taking place at the same time with Sky Blues fans chanting songs against the club's ownership.

The Coventry-Bristol City game itself was a breathless affair, Steven Pressley's Coventry racing three goals ahead before being spectacularly pegged back.

Clarke's penalty gave Coventry the lead before Wilson fired home from the edge of the box and Daniels looked like he had put the result beyond doubt when he headed home an inviting Frank Moussa cross in first-half stoppage-time.

But Baldock began the fightback, forcing home an Emmanuel-Thomas pull-back as the defence appealed for handball and the latter scored a deflected 30-yard free-kick before Baldock capitalised on some indecisive defending to make it 3-3.

Wilson then scored a carbon copy of his first and Robins midfielder Elliott volleyed in another equaliser, but Coventry would not be denied a third time as Daniels secured victory by turning home Clarke's low cross.