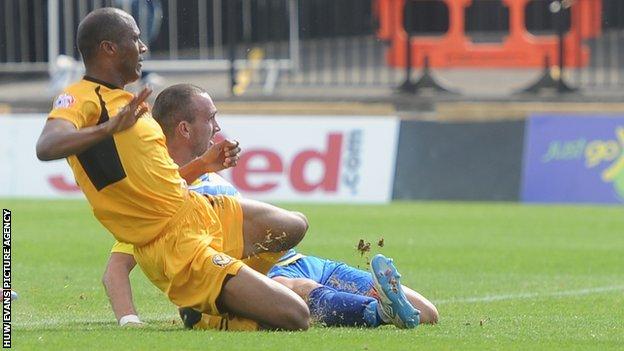 "I don't think it could have gone any better," said manager Edinburgh.

"It's a fantastic result and a very good performance rounding off a very emotional and highly charged day."

Jolley continued where he left off in last season's Conference play-off final with an elegant goal curled in from the edge of the area, before man of the match Zebroski volleyed home his deserved second.

"The first goal settled us down and then we found our stride and got into our rhythm... I thought we were clinical," Edinburgh said.

"I thought Jolley and Zebroski stretched them all day and looked a threat, and when you've got those type of players in your team then nine times out of 10 when a chance does come along we'll dispatch them.

"I think the two goals capped off a tireless game from Zebroski, the amount of work he goes through is tireless and he occupies the back four on his own at times.

"We're really pleased for him because we know that he's had his personal problems, but I feel there's a lot more to come from him."

Zebroski, 26, joined Newport as a free agent in June, having had his contract at Cheltenham terminated in January and not playing again for the rest of the season.

His performance suggests he has settled quickly at Rodney Parade and against Accrington formed a potent strike-force with Jolley.

"We know Christian is a very clinical finisher; he's calm and when he got himself opened up you could see it going in the net straight away," Edinburgh added.

"I think it was a team performance: there's obviously individuals who are going to grab headlines but we were outstanding... I'm delighted, I really am pleased.

"We set the standards last season and we can't ever come below them. From the day they came back for pre-season it's been more about keeping the reins on than having to encourage or get anything out of them.

"This is a good marker for us and it's great start to what is going to be a real tough season."

Newport travel to Brighton on Tuesday for the first round of the League Cup and then return to league action away at Northampton Town on 10 August.