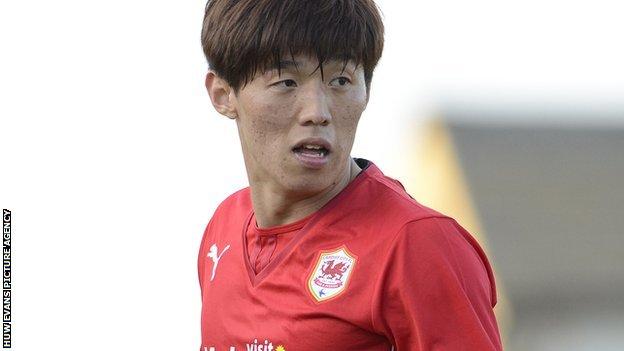 The South Korea midfielder, 23, continued his fine form in pre-season by scoring the goal that

"Three goals, three games in the last couple of weeks and you can see the talent there," Mackay said.

"So I'm looking forward to him being involved heavily this year.

I always knew that the raw talent was there, that the ability was there, it's just making sure we have an environment that allows Kim Bo-Kyung to flourish

"He's someone who can play right across the midfield in any sort of position, quite comfortable playing central midfield or just a little bit further forward.

"It was something I was trying to impart to him, that he did get into that final third to get in the box or get strikes off at goal, which is what he's started doing this year."

Mackay admits that Kim took time to settle into British football but that Cardiff started to see the best of him towards the end of last season as the Welsh club clinched the Championship title and promotion.

"He came from a different culture, didn't know the language and we had to be cautious with him going into the Championship," Mackay said.

"But his mother and father are over with him now, his translator's over and his English is coming on.

"You saw as the year went on how he adapted quickly towards the Championship.

"I always knew that the raw talent was there, that the ability was there, it's just making sure we have an environment that allows him to flourish.

"I think that's shown as the year's gone on last season to the way he played at the end of the season and he's come back in the same frame of mind.

"He played a couple of games in close season for his country, so we've had to be cautious and careful of how we look after him."

Mackay was happy with the way his team played against Chievo and is looking forward to their final pre-season game against Spanish Primera Liga side Athletic Bilbao before starting their league season at West Ham United on 17 August.

"I was delighted with the preparation and the way that we stepped up from the Brentford game [a 3-2 defeat] in terms of minutes on the pitch for players," Mackay added.

"Also they're getting to know each other or getting back into the way of things.

"I think first half it was more about both sides feeling each other out and getting back the shape of the team and keeping the ball.

"But second half we stepped it up and really won the ball higher up in their half and created some problems for them.

"We were playing against a team that have been in Serie A for 11 years out of 12 and a team that technically were good and were big and strong. So it was a good, tough test for us again."