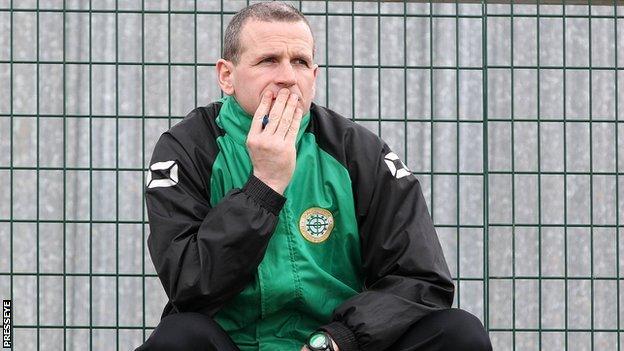 Pat McAllister has left his position as Donegal Celtic manager, with his backroom staff also departing the Suffolk Road outfit.

A number of players are also understood to have cut their ties with the club.

McAllister informed his players of his decision following a challenge game on Saturday, and confirmed his departure on Sunday morning.

The club, who are scheduled to play in Championship One, have been beset by off-field problems in recent years.

McAllister, who was enjoying his second spell in charge of the west Belfast club, admitted that he would consider his future after DC lost their Premiership promotion-relegation play-off tie against Warrenpoint Town in May.

The club's financial position is believed to have deteriorated to the extent that players would not receive wages or expenses in the forthcoming season.

Currently, not a single Donegal Celtic player has been registered with the Northern Ireland Football League - just five days before the new league season kicks-off.

It is also thought that a number of voluntary staff at the club, including chairman Gerard Rooney, have quit.

"I have reluctantly taken the decision to stand down from my position of first-team manager at Donegal Celtic Football Club," said McAllister in a statement.

"It was with a heavy heart that I reached this decision but I felt that the conditions explained to me by the club ahead of the new season did not match my ambition as a manager, nor my ambition for the team and its players.

"It is my firm belief that Donegal Celtic Football Club should be competing in the Irish Premier League and it was my sole aim to achieve that status once again, for the club, and for the community."

The statement continued: "I truly believed that with the squad I had convinced to remain at the club following relegation last season, we would return to the Premier League at the first attempt.

"However, circumstances have changed and unfortunately, for sake of my career, and those of the players, I could not operate under such conditions and restrictions."