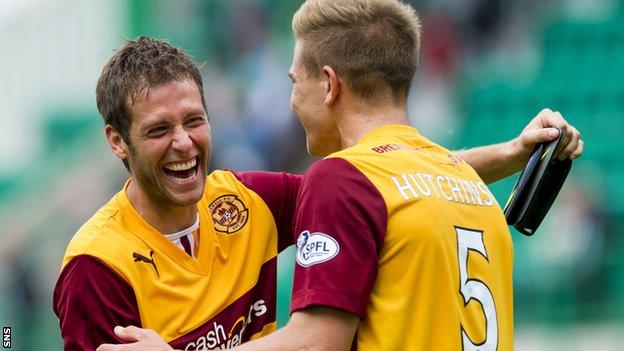 Motherwell manager Stuart McCall admits he will need to weigh up what players he should take to face Kuban Krasnodar in Thursday's Europa League qualifier.

His side lost 2-0 in the first leg at Fir Park and he is wary of player's being too tired for the visit of Aberdeen on Sunday.

"All the lads want to go but I'll be making a decision on a few of them," McCall told BBC Scotland.

"We don't get back until Friday, Aberdeen will be rubbing their hands."

The 'Well boss added: "We want to go and be competitive in the Europa League and we don't want to take a hiding over there. But we've got to take a look at that game on Sunday against Aberdeen."

Motherwell earned a valuable 1-0 away victory against Hibernian at Easter Road to get their Scottish Premiership season off to a positive start.

Henri Anier, on loan from Norwegian outfit Viking Stavanger, entered the fray as a second half substitute and ran onto a long ball to shoot his new side's winner past Ben Williams.

McCall played down any comparisons with Henrik Ojamaa, Anier's Estonian international team-mate who left Fir Park in the summer.

"He's more of a goalscorer than Henrik - they're very different in build and stature," McCall said.

"But he does like to go in behind, and that's sometimes what we need. He adds a bit of pace and strength, but it was good to get a victory for us in our opening day.

"Thursday had a big part to play, we looked a little big leg-weary. When you send substitutes on you just want them to go and make an impact, and I thought all three did that."

Defender Stephen McManus, as well as well midfielders Paul Lawson and Iain Vigurs, made their league debuts for the North Lanarkshire side in Edinburgh.