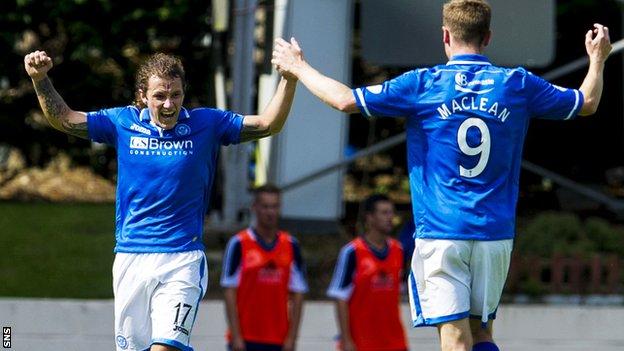 Manager Tommy Wright is confident St Johnstone can complete the job against Minsk in the Europa League qualifiers after beating Hearts 1-0 at home.

The Perth side host the Belarusians in the second leg on Thursday, taking a 1-0 lead into the tie.

"If we're good and go about our business in the right way, we'll go through," Wright told BBC Scotland.

And he hopes to make another signing to help with the long campaign ahead.

"I've spoken to the chairman and I'd probably like to get one more player in," Wright said.

"We have a good squad and if we keep everyone fit we should be competing at the right end of the league.

"Europe is the one we've got to deal with next and obviously I'd like to get through on Thursday night.

"Then we're only one tie away from the group stage which would be an incredible achievement.

Following on from his crucial strike against Rosenborg, striker Stevie May netted his second goal of the season to ensure Saints got the points at McDiarmid Park.

The 20-year-old, who seems to be forming an excellent understanding with Steven MacLean, cut in from the left-hand-side to curl the ball home midway through the first half.

"We actually toyed with the idea of playing him left of the three but I think he's better through the middle," Wright said.

"He loves getting in those positions between full-backs and centre-backs and cutting in. He needs the ball for himself because he'll just shoot from anywhere."