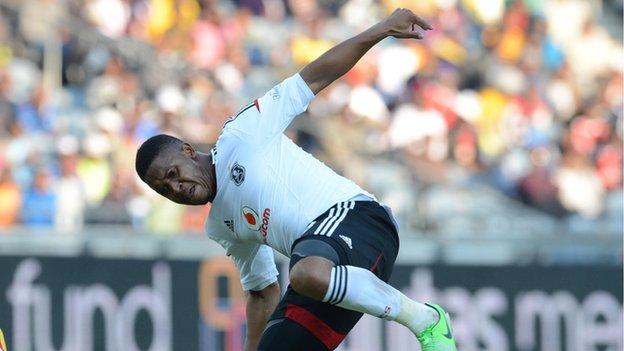 Al Ahly's Cairo rivals Zamalek completed a bad day for Egyptian clubs by losing 1-0 to Congo's AC Leopards in Dolisie in the other Group A match.

South African side Pirates scored through Thandani Ntshumayelo, Andile Jali and Sifiso Myeni while their goalkeeper Senzo Meyiwa saved a penalty in the match, which was played in El Gouna because of the political unrest and security issues in Egypt.

Defending champions Al Ahly, seven times winners of the competition, had complained about both the venue and timing of the match, played in daylight hours during Ramadan when their players are fasting.

The Confederation of African Football (Caf) also ordered them to play in an empty stadium because of crowd trouble earlier in the competition.

Ntshumayelo opened the scoring for the visitors in the 12th minute before Meyiwa saved a spot-kick from Walid Soliman.

Ahly were reduced to 10 men in first half injury-time after striker Ahmed Abdul Zaher was sent off for a studs-up challenge on Pirates centre-back Rooi Mahamutsa on the edge of the area.

Jali doubled Pirates' advantage from a penalty and Myeni added a third in a three-minute spell in the second half.

AC Leopards secured their win from the penalty spot with Kalema Ntela converting in the 37th minute after Zamalek defender Mahmoud Fathalla handled and was sent off for a second bookable offence.

Pirates lead the group on goal difference from Leopards with both clubs on four points, while Ahly and Zamalek have a point each.