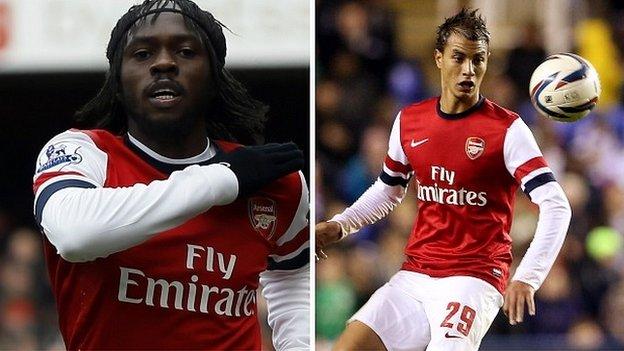 Gervinho and Marouane Chamakh are close to completing moves away from Arsenal, according to Gunners manager Arsene Wenger.

Ivory Coast international Gervinho, who joined the Gunners arrived in Italy on Sunday to finalise his transfer to Serie A side Roma for a reported £6.9m.

Chamakh, a free transfer from Bordeaux in 2010, is set to sign for Crystal Palace, although it has not been decided whether that will be on loan or on a permanent basis.

Both men were major acquisitions for the north London club but fell out of favour after promising starts.

Gervinho, 26, scored 11 goals in 63 appearances but said his farewells at the opening day of the Emirates Cup pre-season tournament on Saturday and will now be reunited with Roma boss Rudi Garcia, who he played under at Lille.

After a loan spell with West Ham last season, Chamakh failed to force his way back into the Gunners reckoning and is set to become Palace's most high-profile summer signing to date.

The 29-year-old registered 11 goals in his first season at Arsenal but failed to reproduce that form thereafter.

Wenger's men lost 2-1 to Galatasaray on Sunday - former Chelsea striker Didier Drogba scoring both goals as the Turkish outfit came from behind to win the match and the tournament - after a 2-2 draw with Napoli a day earlier.

Arsenal were booed off at half-time against Napoli and at full-time against Galatasaray, with many supporters urging Wenger to improve the squad.

His only summer signing to date is

"If the club can target players that are going to improve the team, they are going to be very welcome because that's what we want - to get a better team, better players and compete to win trophies," midfielder Mikel Arteta told BBC Sport.

"But the club is working on that, it is in their hands and I'm sure they are going to do it."