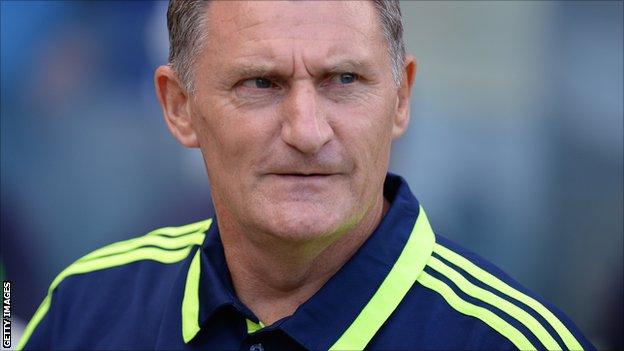 Middlesbrough manager Tony Mowbray has admitted he is frustrated by the delay in adding players to the squad during the summer transfer window.

After shedding seven senior players since the end of last season, Boro have added only three in Josef Varga, Dean Whitehead and Frazer Richardson.

Mowbray told BBC Tees: "It's been going on a while. We're all a bit frustrated.

"We've had a lot of conversations. We'd like to have had players in and yet it hasn't been the case."

Boro have been heavily linked with a move for Bristol City winger Albert Adomah, for whom Wigan Athletic had an £850,000 bid rejected.

Hungary international midfielder Josef Varga joined Boro from Debrecen, former Sunderland and Stoke midfielder Dean Whitehead arrived as a free agent ,while ex-Southampton and Leeds defender Frazer Richardson arrived on a free on the eve of the campaign.

"There are offers on the table for players that haven't been turned down," Mowbray added.

"Clubs are talking about them at boardroom level and we'll wait to see if they come to fruition."

Meanwhile, the Teessiders opened their Championship campaign with home defeat against Leicester City - extending their wait for an opening league game success to a fifth season.

Despite Boro taking a first-half lead through Lukas Jutkiewicz, the Foxes scored twice through Danny Drinkwater and Jamie Vardy without reply to consign Boro to defeat.