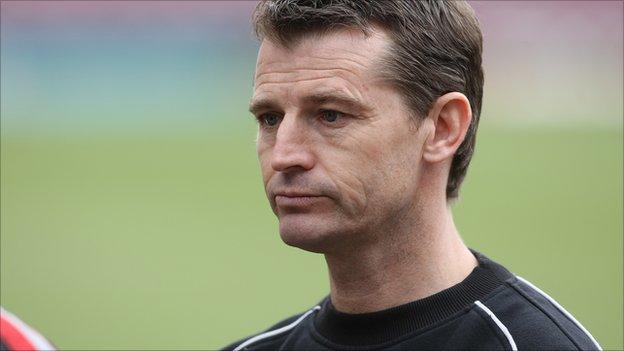 Manager Colin Cooper has said it will take time to turn around Hartlepool United's fortunes, after the League Two season began in defeat by Rochdale.

The 3-0 loss leaves Pools at the foot of the table after the opening weekend of the campaign.

Colin Cooper joined Nottingham Forest in the summer of 1993 following the club's relegation to the old Division One. Frank Clark, successor to Brian Clough, signed the defender from Millwall and he was an instant hit with supporters. Among his highlights were a thunderous free-kick against Forest's rivals Derby in a 2-0 win at the Baseball Ground, England recognition with two full caps, and leading the club to Premier League promotion as captain in 1998.

Cooper and assistant Craig Hignett were handed the Hartlepool job in June after the departure of John Hughes and relegation to League Two last season.

"I see it as a long-term project," Cooper told BBC Tees.

"We want to try to play the way we can play and be creative, but also as an ex-defender we want to keep the ball out of our goal.

"Both things need a lot of work over a lot of time."

Nottingham Forest provide the opposition in the Capital One Cup on Tuesday, in a game that reunites Cooper with his former club.

"They're a club that is pushing toward the Premier League, but it's a bigger test now because they got a kick up the backside," Cooper said.

"They've got to play a top end Championship team now, and what a place to go and a great challenge."